Cristiano Ronaldo dos Santos Aveiro (born 5 February 1985 in Funchal, Madeira), better known as Cristiano Ronaldo, is a Portuguese footballer. He plays for the Italian club Juventus and the Portuguese national team. He is widely considered to be the greatest footballer of all time. Also, many people believe Lionel Messi is better, and their rivalry has been one of the biggest in sports history.

Ronaldo is currently the second most expensive professional football player of all time, after moving from Manchester United to Real Madrid for approximately £80m. At his presentation as a Real Madrid player, 80,000 people greeted him at the Santiago Bernabéu Stadium. This is the world record, passing the 25-year record of 75,000 people at Diego Maradona's presentation for Napoli.

Ronaldo was born and raised in Funchal, Madeira Islands. His father named him "Ronaldo" after former U.S. president Ronald Reagan. In 1997, at age 12, he went on a trial with Sporting CP, who signed him for a fee of £1,500. He then moved from the Madeira Islands to Lisbon, to join the Sporting youth academy.

Ronaldo began his professional career at Sporting Clube de Portugal. On 7 October 2002, Ronaldo played his first game in the Portuguese Primeira Liga, against Moreirense. He scored two goals in their 3–0 win. Ronaldo came to the attention of Manchester United manager Alex Ferguson in August 2003, when Sporting defeated United 3–1 in the first game ever played at the Estádio José Alvalade in Lisbon. His performance impressed the United players, who told Ferguson to sign him. In 2003, Ronaldo joined Manchester United from Sporting CP. He wanted the number 28, the number he wore at Sporting, but was eventually given the number 7. This number had been worn by George Best, Eric Cantona and David Beckham before him. He joined Real Madrid in July 2009. Because number 9 was taken by Raúl González, he had to wait until he left the club in the summer of 2010 to wear number 7.

In the 2007/08 season, he became the only player in the last 25 years to win both the "FIFA World Player of the Year" and the "Young Player of the Year" awards in the same season. In that season, he scored a total of 42 goals and won the European Golden Boot, an award which is given to the top scorer of league matches of every European national league.

On 18 April 2017, he became the first player to reach 100 goals in the UEFA Champions League, after he scored a hat-trick in a 4-2 win against Bayern Munich.

On 10 July 2018, he signed a four-year contract with Italian club Juventus on a €100 million transfer.

Ronaldo's father, José Aveiro, died of alcohol-related liver disease at age 52 in September 2005 when Ronaldo was 20. Ronaldo said that he does not drink alcohol.

Ronaldo became a father on 17 June 2010 following the birth of his son, named Cristiano. He was born in the United States through an American surrogate, and Ronaldo announced that he had full custody. Ronaldo has never publicly revealed information about his son's mother, but he says he will reveal it to Cristiano Jr. when he gets older. Ronaldo was in a relationship with Russian model Irina Shayk from 2010–2015. In June 2017, Ronaldo confirmed on Facebook that he had become the father to twins, Mateo and Eva. In November 2017, his girlfriend Georgina Rodriguez gave birth to their first daughter, Alana.

Ronaldo is a Roman Catholic. He does not have tattoos because it would prevent him from donating blood.

He opened his first fashion boutique under the name "CR7" (his initials and shirt number) on his native-born island of Madeira, Portugal in 2006. In December 2013, Ronaldo opened his own museum called Museu CR7, which has all of his trophies and awards from his career.

A film about his life and career, titled Ronaldo, was released worldwide on 9 November 2015.

He also has an airport named after him, Cristiano Ronaldo International Airport.

At the 2018 FIFA World Cup in Russia he became Europe's all-time top goalscorer after scoring his 85th goal in international colors against Morocco. The goal overtook Puskás's record of 84. 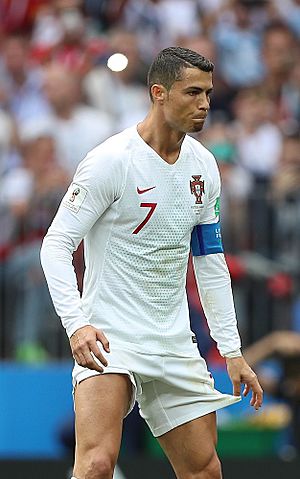 Cristiano Ronaldo at the 2018 World Cup

All content from Kiddle encyclopedia articles (including the article images and facts) can be freely used under Attribution-ShareAlike license, unless stated otherwise. Cite this article:
Cristiano Ronaldo Facts for Kids. Kiddle Encyclopedia.