Created in 1988, 18 of the first 21 Supercoppa Italiana contested were played at the home of the Serie A champions, the exceptions being in 1993 and 2003, when it was held in the United States cities of Washington, D.C., and East Rutherford, New Jersey, and in 2002 when the game was played in the Libyan capital Tripoli. Since 2009, the venues chosen have mostly been outside of Italy.

Of the 32 finals played to date, the venues have been as follows:

In 2018, the Serie A entered into a contract with the General Sports Authority, under which Saudi Arabia will host three out of the next five Supercoppa events. 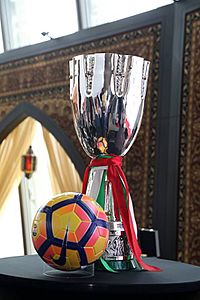 The Supercoppa Italiana won by Milan in 2016.

All content from Kiddle encyclopedia articles (including the article images and facts) can be freely used under Attribution-ShareAlike license, unless stated otherwise. Cite this article:
Supercoppa Italiana Facts for Kids. Kiddle Encyclopedia.