Cameroon (officially called the Republic of Cameroon) is a country in west Africa. Its capital is Yaoundé. The largest city in Cameroon is Douala. The population of Cameroon is about 20 million. Cameroon's president is Paul Biya. They speak nearly 250 languages in Cameroon. French and English are the official languages. 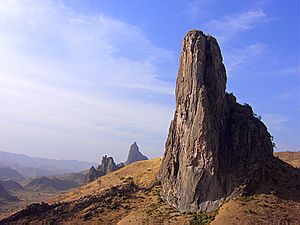 At 475,442 square kilometres (183,569 sq mi), Cameroon is the world's 53rd-largest country. It is about the size of Papua New Guinea. The country is in Central and West Africa on the Bight of Bonny, part of the Gulf of Guinea and the Atlantic Ocean. The country's neighbours are Nigeria to the west; Chad to the northeast; the Central African Republic to the east; and Equatorial Guinea, Gabon, and the Republic of the Congo to the south.

The constitution divides Cameroon into 10 regions. On 12 November 2008, the President changed the divisions from provinces to regions. Each region is headed by a presidentially appointed governor.

The regions are divided into 58 divisions. These are headed by presidentially appointed divisional officers.

Some of the largest cities in Cameroon are:

The official languages of Cameroon are French and English. It is part of both the British Commonwealth and La Francophonie. Most people speak French.

All content from Kiddle encyclopedia articles (including the article images and facts) can be freely used under Attribution-ShareAlike license, unless stated otherwise. Cite this article:
Cameroon Facts for Kids. Kiddle Encyclopedia.