Kids Encyclopedia Facts
"Embiid" redirects here. It is not to be confused with Embiidae or Embid.

Joel Hans Embiid ( joh-EL-_-EM-beed; born 16 March 1994) is a Cameroonian professional basketball player for the Philadelphia 76ers of the National Basketball Association (NBA). After one year of college basketball with the Kansas Jayhawks, he was drafted with the third overall pick in the 2014 NBA draft by the 76ers. Multiple foot and knee injuries delayed his debut for two seasons until 2016–17, when he was named to the NBA All-Rookie First Team despite playing only 31 games. Embiid has received four All-Star selections. He has nicknamed himself "the Process" in response to a refrain from 76ers fans during the Sam Hinkie era to "trust the process".

Embiid was born in Yaoundé, Cameroon, to military officer Thomas Embiid and his wife, Christine. He played volleyball and soccer in childhood and originally planned to play professional volleyball in Europe but started playing basketball at age 15, modeling his game after NBA Hall of Fame center Hakeem Olajuwon. Embiid was discovered at a basketball camp by Luc Mbah a Moute, a fellow native of Yaounde and an NBA player. With Mbah a Moute as his mentor, Embiid moved to the United States at age 16 to devote himself to becoming a professional basketball player.

Embiid enrolled at Montverde Academy, Mbah a Moute's alma mater, but transferred after his first year due to a lack of playing time. He then attended The Rock School, a Christian academy, in Gainesville, Florida. As a senior, he led their team to a 33–4 record and state championship, averaging 13.0 points, 9.7 rebounds and 1.9 blocks per game.

Embiid was a five-star recruit according to Rivals.com and committed to Kansas in November 2012. 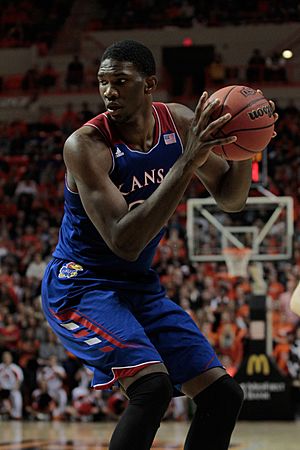 Embiid attended the University of Kansas for one year. On 13 February 2014, he was named one of the 30 finalists for the Naismith College Player of the Year. In 2013–14, he played 28 games, averaging 11.2 points, 8.1 rebounds, 1.4 assists and 2.6 blocks in 23.1 minutes per game. He had over 15 points in seven games and over 5 blocks in six games. He subsequently earned Big 12 Defensive Player of the Year honors and was named second-team All-Big 12.

Embiid suffered a stress fracture in his back in March 2014. He missed that year's Big 12 tournament and NCAA Tournament. Kansas lost in the third round of the NCAA Tournament. 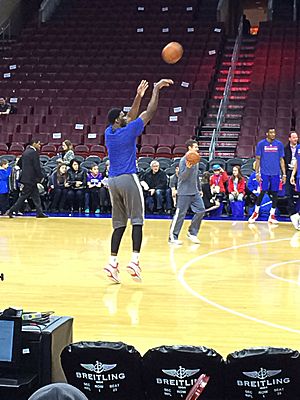 Embiid practicing with the Philadelphia 76ers in 2014

On 9 April 2014, Embiid declared for the 2014 NBA draft, forgoing his final three years of college eligibility. On 20 June 2014, he underwent surgery on a broken navicular bone in his right foot, and was subsequently ruled out for four to six months. Six days later, he was selected with the third overall pick by the Philadelphia 76ers. That selection made him the third Cameroonian-born NBA player after Ruben Boumtje-Boumtje and Luc Mbah a Moute, as well as the highest selected player from Cameroon.

On 26 August 2014, Embiid signed his rookie scale contract with the 76ers. He was later ruled unlikely to play at all in the 2014–15 season due to the broken navicular bone in his foot. After missing the entire 2014–15 season, it was announced on 13 June 2015 that Embiid had suffered a setback in his recovery after a CT scan revealed less healing than anticipated. It was later determined that Embiid's chances of playing in the 2015–16 season were slim following a second round of surgery on his right foot on 18 August 2015. He missed the entire 2015–16 season.

On 4 October 2016, Embiid started at center in the 76ers' first preseason game against the Boston Celtics. In his first action, he recorded six points, four rebounds and two blocks in 13 minutes en route to a 92–89 victory.

On 11 January 2017, Embiid grabbed a career-high 14 rebounds in a 98–97 win over the New York Knicks. On 23 January, he was named Eastern Conference Player of the Week for games played Monday, 16 January through Sunday, 22 January. Two days later, he was named in the World Team for the 2017 Rising Stars Challenge. On 2 February 2017, he was named Eastern Conference Rookie of the Month for games played in January, while also being named a Taco Bell Skills Challenge participant. On 11 February 2017, it was revealed that Embiid had a torn meniscus in his left knee, but that surgery would not be required. As a result of the injury, Embiid was ruled out of the All-Star Weekend festivities. After initially ruling him out indefinitely on 27 February with swelling in his left knee, the 76ers issued a statement two days later announcing that Embiid would miss the rest of the 2016–17 season, an MRI on his left knee having revealed that the area affected by the bone bruise had improved significantly while the previously identified meniscus tear appeared more pronounced. On 24 March 2017, he underwent successful minor arthroscopic surgery to address the meniscus tear in his left knee. At the season's end, he was named to the NBA All-Rookie First Team.

On 10 October 2017, Embiid signed a five-year, $148 million designated rookie scale maximum contract extension with the 76ers, with the ability to earn an additional $30 million if he earns an All-NBA first-, second- or third-team selection, or is named MVP in 2017–18. In the 76ers' season opener against the Washington Wizards on 18 October, Embiid had 18 points and 13 rebounds in a 120–115 loss. Five days later, he scored 30 points in a 97–86 win over the Detroit Pistons. On 30 October, he had 22 points, nine rebounds, five assists and two steals in 25 minutes in a 115–107 win over the Houston Rockets, becoming just the third player to post such numbers in 25 minutes of play or less since 1983–84, joining Pau Gasol (2015) and Fat Lever (1990). On 15 November, Embiid scored a career-high 46 points—the most by a Philadelphia player in 11 years—and grabbed 15 rebounds in a 115–109 win over the Los Angeles Lakers. Embiid also had seven assists and seven blocked shots, making him the first NBA player with 40 points, seven assists and seven blocks in a game since Julius Erving against the Pistons in 1982. Embiid shot 14 for 20 from the field and 16 of 19 at the free throw line, giving him the most points by a Sixers player since Allen Iverson scored 46 against the Chicago Bulls in 2006. In addition, the previous 35 times someone scored at least 44 for the 76ers, it was Iverson. 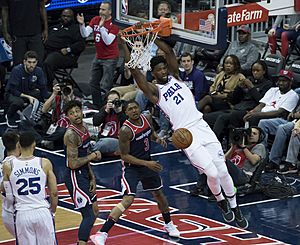 Embiid dunking the basketball in 2018

After missing the first two games of the 76ers' first-round playoff series against the Miami Heat with the left eye injury, Embiid made his playoff debut in Game 3 on 19 April. He helped the 76ers take a 2–1 lead in the series with a 128–108 win behind his 23 points. Embiid helped the 76ers move on to the second round of the playoffs with a 4–1 defeat of the Heat, as he recorded 19 points and 12 rebounds in a 104–91 win in Game 5. In Game 1 of the 76ers' second-round series against the Celtics, Embiid recorded 31 points and 13 rebounds in a 117–101 loss. The 76ers went on to lose to the Celtics in five games, with Embiid recording 27 points and 12 rebounds in a 114–112 loss in Game 5. Embiid said in his postgame press conference after Game 5 that he felt there should have been a foul called on his potential game-tying layup attempt with under 20 seconds left. The NBA later confirmed that a foul should have been called on the play.

On 25 November 2019, Embiid grabbed a game-high 13 rebounds but went scoreless in an NBA game for the first time in his career in the 76ers' 101–96 loss to the Toronto Raptors. On 20 February 2020, Embiid scored a then season-high 39 points, along with 16 rebounds, to lead Philadelphia to a 112–104 overtime win against the Brooklyn Nets. Four days later, Embiid scored a career-high 49 points and recorded 14 rebounds in a 129–112 win against the Atlanta Hawks. On 1 August, Embiid scored 41 points, as well as 21 rebounds, in a 127–121 loss to the Indiana Pacers. This was the 76ers’ first game in the Orlando bubble, returning from a 4-month hiatus due to the COVID-19 pandemic.

On 20 February 2021, Embiid recorded a double-double with a career-high 50 points and 17 rebounds in the 76ers' 112–105 win against the Chicago Bulls. On 8 June, Embiid had a playoff career-high 40 points alongside 13 rebounds, in a second round win against the Atlanta Hawks.

Embiid is eligible to compete for Cameroon national basketball team. On 7 February 2017, Embiid was named to the preliminary team to compete in the 2017 FIBA AfroBasket in the Republic of Congo, with the group qualifier taking place in March, during the NBA regular season. Fellow Cameroon-born NBA player Luc Mbah a Moute has voiced his opinion on Embiid representing his country saying, "It would be great for our team, our country and Joel". Embiid ultimately did not compete for Cameroon at AfroBasket 2017.

His younger brother, Arthur, died on 16 October 2014 in Cameroon in a car crash. He also has a younger sister named Muriel. In addition to English, Embiid is fluent in French and Basaa. Embiid has been in a relationship with Brazilian model Anne de Paula since 2018. In September 2020, they welcomed their first child, a son.

Embiid is known for his playful personality and social media presence, particularly for his trolling. He is a teetotaler.

All content from Kiddle encyclopedia articles (including the article images and facts) can be freely used under Attribution-ShareAlike license, unless stated otherwise. Cite this article:
Joel Embiid Facts for Kids. Kiddle Encyclopedia.