The East Region is a region in Cameroon. The capital city is Bertoua.

The region has several river systems: the Nyong, the Dja, the Lom, the Kadéï, the Boumba, the Sangha and Ngoko. The lower two thirds of the region is covered in rain forest.

The government of Cameroon has established four forest and game reserves in the East: the Dja Reserve, Lobéké Park, the Boumba-Bek Reserve and the Nki Reserve. 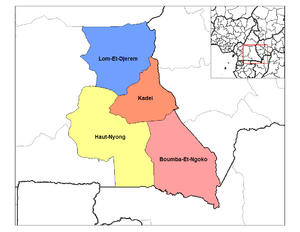 The East is divided into four departments:

All content from Kiddle encyclopedia articles (including the article images and facts) can be freely used under Attribution-ShareAlike license, unless stated otherwise. Cite this article:
East Region (Cameroon) Facts for Kids. Kiddle Encyclopedia.