Republic of the Congo facts for kids

Kids Encyclopedia Facts
Not to be confused with Democratic Republic of the Congo.

The Republic of the Congo or simply either Congo or the Congo, is a country located in the western coast of Central Africa. The country is bordered to the west by Gabon, to its northwest by Cameroon and its northeast by the Central African Republic, to the southeast by the DR Congo, to its south by the Angolan exclave of Cabinda and to its southwest by the Atlantic Ocean. French is the official language of the Republic of the Congo.

The Republic of the Congo is a member of the African Union, the United Nations, La Francophonie, the Economic Community of Central African States, and the Non-Aligned Movement. It has become the fourth-largest oil producer in the Gulf of Guinea, providing the country with a degree of prosperity despite political and economic instability in some areas and unequal distribution of oil revenue nationwide. Congo's economy is heavily dependent on the oil sector, and economic growth has slowed considerably since the post-2015 drop in oil prices. With a population of 5.2 million, 88.5% of the country practices Christianity.

The region was dominated by Bantu-speaking tribes at least 3,000 years ago, who built trade links leading into the Congo River basin. Congo was formerly part of the French colony of Equatorial Africa. The Republic of the Congo was established on 28 November 1958 and gained independence from France in 1960. It was a Marxist–Leninist state from 1969 to 1992, under the name People's Republic of the Congo. The sovereign state has had multi-party elections since 1992, although a democratically elected government was ousted in the 1997 Republic of the Congo Civil War, and President Denis Sassou Nguesso, who first came to power in 1979, has ruled for almost 4 decades.

Congo is located in the central-western part of sub-Saharan Africa, along the Equator, lying between latitudes 4°N and 5°S, and longitudes 11° and 19°E. To the south and east of it is the Democratic Republic of the Congo. It is also bounded by Gabon to the west, Cameroon and the Central African Republic to the north, and Cabinda (Angola) to the southwest. It has a short coast on the Atlantic Ocean.

The capital, Brazzaville, is located on the Congo River, in the south of the country, immediately across from Kinshasa, the capital of the Democratic Republic of the Congo.

The southwest of the country is a coastal plain for which the primary drainage is the Kouilou-Niari River; the interior of the country consists of a central plateau between two basins to the south and north. Forests are under increasing exploitation pressure. Congo had a 2018 Forest Landscape Integrity Index mean score of 8.89/10, ranking it 12th globally out of 172 countries.

Congo lies within four terrestrial ecoregions: Atlantic Equatorial coastal forests, Northwestern Congolian lowland forests, Western Congolian swamp forests, and Western Congolian forest-savanna mosaic. Since the country is located on the Equator, the climate is consistent year-round, with the average day temperature a humid 24 °C (75 °F) and nights generally between 16 °C (61 °F) and 21 °C (70 °F). The average yearly rainfall ranges from 1,100 millimetres (43 in) in the Niari Valley in the south to over 2,000 millimetres (79 in) in central parts of the country. The dry season is from June to August, while in the majority of the country, the wet season has two rainfall maxima: one in March–May and another in September–November.

In 2006–07, researchers from the Wildlife Conservation Society studied gorillas in heavily forested regions centered on the Ouesso District of the Sangha Region. They suggest a population on the order of 125,000 western lowland gorillas, whose isolation from humans has been largely preserved by inhospitable swamps.

A proportional representation of Republic of the Congo exports, 2019

Cassava is an important food crop in the Republic of the Congo. 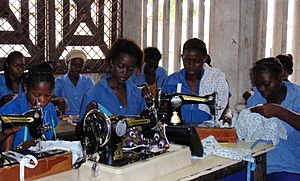 The economy is a mixture of village agriculture and handicrafts, an industrial sector based mainly on petroleum, support services, and a government characterized by budget problems and overstaffing. Petroleum extraction has supplanted forestry as the mainstay of the economy. In 2008, the oil sector accounted for 65% of the GDP, 85% of government revenue, and 92% of exports. The country also has large untapped mineral wealth.

The Republic of the Congo also has large untapped base metal, gold, iron, and phosphate deposits. 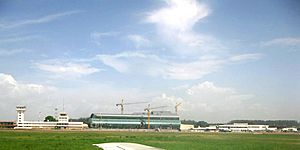 Transport in the Republic of the Congo includes land, air, and water transportation. The country's rail system was built by forced laborers during the 1930s and largely remains in operation. There are also over 1000 km of paved roads, and two major international airports (Maya-Maya Airport and Pointe-Noire Airport) which have flights to destinations in Europe, Africa, and the Middle East. The country also has a large port on the Atlantic Ocean at Pointe-Noire and others along the Congo River at Brazzaville and Impfondo.

The Republic of the Congo's sparse population is concentrated in the southwestern portion of the country, leaving the vast areas of tropical jungle in the north virtually uninhabited. Thus, Congo is one of the most urbanized countries in Africa, with 70% of its total population living in a few urban areas, namely in Brazzaville, Pointe-Noire, or one of the small cities or villages lining the 534-kilometre (332 mi), railway which connects the two cities. In rural areas, industrial and commercial activity has declined rapidly in recent years, leaving rural economies dependent on the government for support and subsistence.

Before the 1997 war, about 9,000 Europeans and other non-Africans lived in Congo, most of whom were French; only a fraction of this number remains. Around 300 American expatriates reside in the Congo.

The Republic of the Congo has a wide variety of natural landscapes, ranging from the savanna plains in the North Niari flooded forests, to the vast Congo River, to the rugged mountains and forest of Mayombe, 170 km of beaches along the Atlantic coast. The numerous ethnic groups, forms of art, and political structures express a rich cultural diversity.

Among the best known are Vili nail fetishes, Beembe statuettes that are full of expression; the masks of the Punu and Kwele, Kota reliquaries, Teke fetishes, and cemeteries with monumental tombs are examples of this variety. The Lari people also have unique artifacts.

The Republic of the Congo also has considerable colonial architectural heritage, which it is preserving. Restoration of architectural works is underway in Brazzaville, for example, at the Basilica of Sainte-Anne du Congo, which was completed in 2011.

Because of problems with the communications network, the country is not ready to build on heritage tourism. It is working to improve the network that supports its hotels and related tourism facilities in Pointe Noire and Brazzaville. Many sites are difficult to reach in overland visits. Some of the South's most populous and developed locations are often the least accessible. For example, the massive Chaillu Mountains are almost impossible to visit.

School children in the classroom, Republic of the Congo

Public education is theoretically free and mandatory for under-16-year-olds. Education between ages nine and sixteen is compulsory. Pupils who complete six years of primary school and seven years of secondary school obtain a baccalaureate.

The country has universities where students can obtain a bachelor's degree in three years and a master's in five. Marien Ngouabi University—which offers courses in medicine, law, and other fields—is the country's only public university.

Instruction at all levels is in French and the educational system as a whole models the French system.

All content from Kiddle encyclopedia articles (including the article images and facts) can be freely used under Attribution-ShareAlike license, unless stated otherwise. Cite this article:
Republic of the Congo Facts for Kids. Kiddle Encyclopedia.