Okra (Abelmoschus esculentus) are known in many English-speaking countries as lady's fingers or gumbo) is a flowering plant in the mallow family, related to cotton and hibiscus. It is valued for its edible green seed pods. It is cultivated for the pods, which are harvested in the immature stage and used in salads and soups. 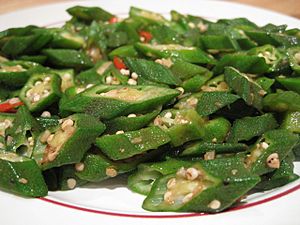 The products of the plant are mucilaginous, resulting in the characteristic "goo" or slime when the seed pods are cooked; the mucilage contains soluble fiber. Pods are cooked, pickled, eaten raw, or included in salads. Okra may be used in developing countries to mitigate malnutrition and alleviate food insecurity.

Raw okra is 90% water, 2% protein, 7% carbohydrates and negligible in fat. In a 100 gram amount, raw okra is rich (20% or more of the Daily Value, DV) in dietary fiber, vitamin C and vitamin K, with moderate contents of thiamin, folate and magnesium (table).

Young okra leaves may be cooked in a similar way to the greens of beets or dandelions. The leaves are also eaten raw in salads. Okra seeds may be roasted and ground to form a caffeine-free substitute for coffee. When importation of coffee was disrupted by the American Civil War in 1861, the Austin State Gazette said, "An acre of okra will produce seed enough to furnish a plantation with coffee in every way equal to that imported from Rio."

Greenish-yellow edible okra oil is pressed from okra seeds; it has a pleasant taste and odor, and is high in unsaturated fats such as oleic acid and linoleic acid. The oil content of some varieties of the seed is about 40%. At 794 kg/ha, the yield was exceeded only by that of sunflower oil in one trial. A 1920 study found that a sample contained 15% oil. A 2009 study found okra oil suitable for use as a biofuel.

Bast fibre from the stem of the plant has industrial uses such as the reinforcement of polymer composites. The mucilage produced by the okra plant can be used for the removal of turbidity from waste water by virtue of its flocculent properties.

All content from Kiddle encyclopedia articles (including the article images and facts) can be freely used under Attribution-ShareAlike license, unless stated otherwise. Cite this article:
Okra Facts for Kids. Kiddle Encyclopedia.