Malvaceae is a family of flowering plants. The family includes about 1000 species in 75 genera. They are found in tropical and temperate regions. They are not found very often in places such as Antarctica because those places are too cold for Malvaceae plants. 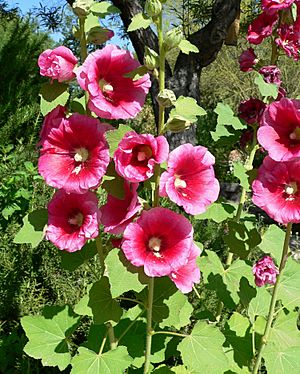 Alcea rosea is a common garden flower in Malvaceae

Most species are herbs or shrubs, but some are trees and lianas. 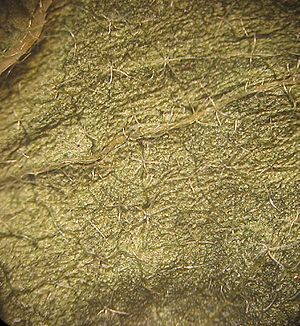 Leaves are generally alternate, often palmately lobed or compound and palmately veined. The margin may be entire, but when dentate, a vein ends at the tip of each tooth (malvoid teeth). Stipules are present. The stems contain mucous canals and often also mucous cavities. Hairs are common, and are most typically stellate.. Stems of Bombacoideae are often covered in thick prickles.

The flowers are commonly borne in definite or indefinite axillary inflorescences, which are often reduced to a single flower, but may also be cauliflorous, oppositifolious, or terminal. They often bear supernumerary bracts in the structure of a bicolor unit. They can be unisexual or bisexual, and are generally actinomorphic, often associated with conspicuous bracts, forming an epicalyx. They generally have five valvate sepals, most frequently basally connate, with five imbricate petals. The stamens are five to numerous, and connate at least at their bases, but often forming a tube around the pistils. The pistils are composed of two to many connate carpels. The ovary is superior, with axial placentation, with capitate or lobed stigma. The flowers have nectaries made of many tightly packed glandular hairs, usually positioned on the sepals. 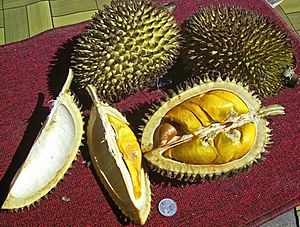 The fruits are most often loculicidal capsules, schizocarps or nuts.

Self-pollination is often avoided by means of protandry. Most species are entomophilous (pollinated by insects). Bees from the Emphorini tribe of the Apidae (including Ptilothrix, Diadasia, and Melitoma) are known to specialize on the plants.

All content from Kiddle encyclopedia articles (including the article images and facts) can be freely used under Attribution-ShareAlike license, unless stated otherwise. Cite this article:
Malvaceae Facts for Kids. Kiddle Encyclopedia.