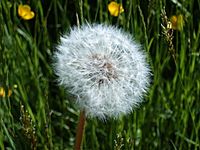 A dandelion turned to seed 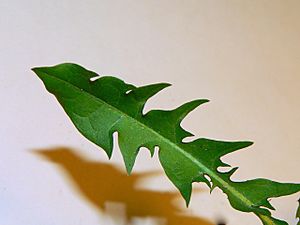 A dandelion is a flower. Its scientific name is Taraxacum, a large genus of flowering plants in the family Asteraceae. They are native to Eurasia and North and South America. Two species, T. officinale and T. erythrospermum, are found as weeds worldwide. All parts of both species are edible.

Their sharp leaves look a bit like lion's teeth. Its seeds are like little parachutes that fly away with the wind, spreading and growing more dandelions. They are used in China as medicine. Dandelion pollen can often make people have allergies.

Like other members of the Asteraceae family, they have very small flowers collected together into a composite flower head. Each single flower in a head is called a floret. Many Taraxacum species produce seeds asexually by apomixis, where the seeds are produced without pollination. This results in offspring that are genetically identical to the parent plant.

Al Razi around 900 (A.D.) wrote "the tarashaquq is like chicory". The Persian scientist and philosopher Ibn Sīnā around 1000 (A.D.) wrote a book chapter on Taraxacum. Gerard of Cremona, in translating Arabic to Latin around 1170, spelled it tarasacon.

The species of Taraxacum are tap-rooted, perennial, herbaceous plants, native to temperate areas of the Northern Hemisphere. The genus contains many species which usually (or in the case of triploids, obligately) reproduce by apomixis, resulting in many local populations and endemism. In the British Isles alone, 234 microspecies are recognised in 9 loosely defined sections, of which 40 are "probably endemic".

In general, the leaves are 5–25 cm long or longer, simple, lobed, and form a basal rosette above the central taproot. The flower heads are yellow to orange coloured, and are open in the daytime, but closed at night. The heads are borne singly on a hollow stem (scape) that is usually leafless and rises 1–10 cm or more above the leaves. Stems and leaves exude a white, milky latex when broken. A rosette may produce several flowering stems at a time. The flower heads are 2–5 cm in diameter and consist entirely of ray florets. The flower heads mature into spherical seed heads called blowballs or clocks (in both British and American English) containing many single-seeded fruits called achenes. Each achene is attached to a pappus of fine hairs, which enable wind-aided dispersal over long distances.

The flower head is surrounded by bracts (sometimes mistakenly called sepals) in two series. The inner bracts are erect until the seeds mature, then flex downward to allow the seeds to disperse. The outer bracts are often reflexed downward, but remain appressed in plants of the sections Palustria and Spectabilia. Some species drop the parachute from the achenes; the hair-like parachutes are called pappus, and they are modified sepals. Between the pappus and the achene is a stalk called a beak, which elongates as the fruit matures. The beak breaks off from the achene quite easily, separating the seed from the parachute.

A number of species of Taraxacum are seed-dispersed ruderals that rapidly colonize disturbed soil, especially the common dandelion (T. officinale), which has been introduced over much of the temperate world. After flowering is finished, the dandelion flower head dries out for a day or two. The dried petals and stamens drop off, the bracts reflex (curve backwards), and the parachute ball opens into a full sphere. 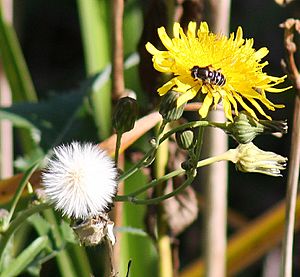 Many similar plants in the Asteraceae family with yellow flowers are sometimes known as false dandelions. Dandelions are very similar to catsears (Hypochaeris). Both plants carry similar flowers, which form into windborne seeds. However, dandelion flowers are borne singly on unbranched, hairless and leafless, hollow stems, while catsear flowering stems are branched, solid, and carry bracts. Both plants have a basal rosette of leaves and a central taproot. However, the leaves of dandelions are smooth or glabrous, whereas those of catsears are coarsely hairy.

Early-flowering dandelions may be distinguished from coltsfoot (Tussilago farfara) by their basal rosette of leaves, their lack of disc florets, and the absence of scales on the flowering stem.

Other plants with superficially similar flowers include hawkweeds (Hieracium) and hawksbeards (Crepis). These are readily distinguished by branched flowering stems, which are usually hairy and bear leaves.

Dandelions are thought to have evolved about 30 million years ago in Eurasia. Fossil seeds of †Taraxacum tanaiticum have been recorded from the Pliocene of southern Russia. Dandelions have been used by humans for food and as an herb for much of recorded history. They were well known to ancient Egyptians, Greeks and Romans, and have been used in Chinese traditional medicine for over a thousand years. Dandelions probably arrived in North America on the Mayflower--not as stowaways, but brought on purpose for their medicinal benefits.

The English folk name "piss-a-bed" (and indeed the equivalent contemporary French pissenlit) refers to the strong diuretic effect of the plant's roots. In various northeastern Italian dialects, the plant is known as pisacan ("dog pisses"), because they are found at the side of pavements.

In Swedish, it is called maskros (worm rose) after the small insects (thrips) usually present in the flowers. In Finnish and Estonian, the names (voikukka, võilill) translate as butter flower, due to the color of the flower. In Lithuanian, it is known as "Pienė", meaning "milky", because of the white liquid that is produced when the stems are cut. The Welsh (dant-y-llew), German (Löwenzahn), Norwegian (løvetann) and Spanish (diente de león) names mean the same as the French and the English names.

Dandelions are found on all continents and have been gathered for food since prehistory, but the varieties cultivated for consumption are mainly native to Eurasia. A perennial plant, its leaves will grow back if the taproot is left intact. To make leaves more palatable, they are often blanched to remove bitterness, or sauteed in the same way as spinach. Dandelion leaves and buds have been a part of traditional Kashmiri, Slovenian, Sephardic, Chinese, and Korean cuisines. In Crete, the leaves of a variety called 'Mari' (Μαρί), 'Mariaki' (Μαριάκι), or 'Koproradiko' (Κοπροράδικο) are eaten by locals, either raw or boiled, in salads. T. megalorhizon, a species endemic to Crete, is eaten in the same way; it is found only at high altitudes (1000 to 1600 m) and in fallow sites, and is called pentaramia (πενταράμια) or agrioradiko (αγριοράδικο).

The flower petals, along with other ingredients, usually including citrus, are used to make dandelion wine. The ground, roasted roots can be used as a caffeine-free dandelion coffee. Dandelion was also traditionally used to make the traditional British soft drink dandelion and burdock, and is one of the ingredients of root beer. Also, dandelions were once delicacies eaten by the Victorian gentry, mostly in salads and sandwiches.

Dandelion leaves contain abundant vitamins and minerals, especially vitamins A, C, and K, and are good sources of calcium, potassium, iron, and manganese.

Historically, dandelion was prized for a variety of medicinal properties, and it contains a number of pharmacologically active compounds. Dandelion is used as a herbal remedy in Europe, North America, and China. It has been used in herbal medicine to treat infections, bile and liver problems, and as a diuretic.

Taraxacum seeds are an important food source for certain birds.

Dandelions are also important plants for Northern Hemisphere bees, providing an important source of nectar and pollen early in the season. Dandelions are used as food plants by the larvae of some species of Lepidoptera (butterflies and moths). They are also used as a source of nectar by the pearl-bordered fritillary (Boloria euphrosyne), one of the earliest emerging butterflies in the spring.

The dandelion plant is a beneficial weed, with a wide range of uses, and is even a good companion plant for gardening. Its taproot will bring up nutrients for shallower-rooting plants, and add minerals and nitrogen to soil. It is also known to attract pollinating insects and release ethylene gas which helps fruit to ripen.

Dandelion pollen may cause allergic reactions when eaten, or adverse skin reactions in sensitive individuals. Contact dermatitis after handling has also been reported, probably from the latex in the stems and leaves. Due to its high potassium level, dandelion can also increase the risk of hyperkalemia when taken with potassium-sparing diuretics.

As a noxious weed 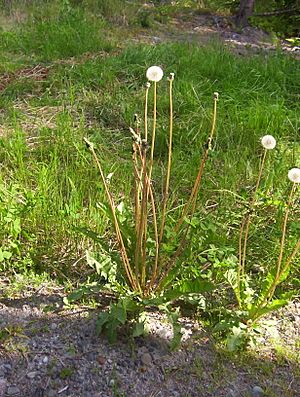 Dandelions are considered an invasive plant in Alaska, and thrive in the long hours of daylight in summer there, such as this tall specimen, at 85 centimetres (33 in)

The species T. officinale is listed as a noxious weed in some jurisdictions, and is considered to be a nuisance in residential and recreational lawns in North America. It is also an important weed in agriculture and causes significant economic damage because of its infestation in many crops worldwide.

As source of natural rubber

Dandelions secrete latex when the tissues are cut or broken, yet in the wild type, the latex content is low and varies greatly. Using modern cultivation methods and optimization techniques, scientists in the Fraunhofer Institute for Molecular Biology and Applied Ecology (IME) in Germany developed a cultivar that is suitable for commercial production of natural rubber. The latex produced exhibits the same quality as the natural rubber from rubber trees. In collaboration with Continental Tires, IME is building a pilot facility. As of May 2014, the first prototype test tires made with blends from dandelion-rubber are scheduled to be tested on public roads over the next few years.

All content from Kiddle encyclopedia articles (including the article images and facts) can be freely used under Attribution-ShareAlike license, unless stated otherwise. Cite this article:
Dandelion Facts for Kids. Kiddle Encyclopedia.