White Sulphur Springs is a city in Greenbrier County in southeastern West Virginia, United States. The population was 2,444 at the 2010 census. The city emblem consists of five dandelion flowers and the citizens celebrate spring with an annual Dandelion Festival. 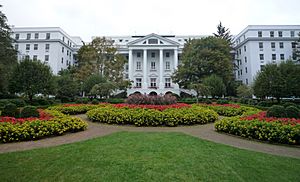 White Sulphur Springs grew in the first half of the nineteenth century as the southern "Queen of the Watering Places". The springs resort first became the standard summer destination for wealthy Virginia Low Country residents seeking reprieve from heat, humidity, and disease of the "sickly season". As its popularity increased and it gained status as a socially exclusive site, the springs attracted elite guests from all areas of the South.

The resort, now known as The Greenbrier, remains one of the country's most luxurious and exclusive resorts. For many years, Sam Snead was the resort's golf pro. The resort has another significant place in golf history; in 1979, it hosted the first Ryder Cup to feature the current competitive setup of the United States and European sides. Golf in the United States began near White Sulphur Springs when the Montague family founded Oakhurst Links in 1884, making it the oldest organized golf club in the country.

In 1992 the Washington Post reported that, during the Cold War, the resort had been the site of a "bunker", the Emergency Relocation Center, which was intended to house and protect the U.S. Congress in the event of a nuclear attack.

In June 2016, there was a historic severe flood in West Virginia that impacted White Sulphur Springs.

The Greenbrier also currently serves as the location for training camp for the New Orleans Saints.

Amtrak, the national passenger rail service, provides service to White Sulphur Springs three times a week via the Cardinal route. The station is located at the entrance to The Greenbrier.

The Alleghany Subdivision of the main line of the former Chesapeake and Ohio Railroad (now part of CSX) runs through White Sulphur Springs. At one time in its history it was part of the limestone flux cargo route from Hinton, West Virginia to Clifton Forge, Virginia. Its affectionate nickname was "The Gravel Gertie" after the Dick Tracy character.

In 1987 the White Sulphur Springs Library was rebuilt from the old community house. The Library is being redeveloped as an educational resource and one of the hearts of the town.

The town is featured as a US Army Center of Operations in the book Worldwar: In the Balance, by Harry Turtledove

All content from Kiddle encyclopedia articles (including the article images and facts) can be freely used under Attribution-ShareAlike license, unless stated otherwise. Cite this article:
White Sulphur Springs, West Virginia Facts for Kids. Kiddle Encyclopedia.