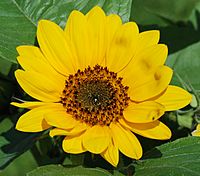 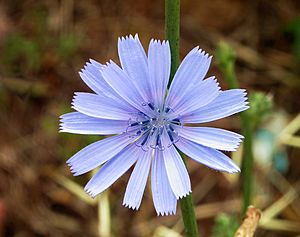 Chicory flowers have no disk florets. Each floret has one large petal.

A pseudanthium (Greek for "false flower") or flower head is a special type of inflorescence. Many flowers are grouped together to form a flower-like structure. The real flowers ("florets") are generally small and greatly reduced, but can sometimes be quite large (as in the sunflower flower head).

Pseudanthia are characteristic of the daisy and sunflower family (Asteraceae or Compositae). Their flowers are either ray flowers or disk flowers. The disk flowers in the center of the pseudanthium look like the centre of a normal flower. Flowers on the periphery have one large petal. This sytem is unique to this family. Either ray or disk flowers may be absent in some species: Senecio vulgaris lacks ray flowers and Taraxacum officinale lacks disk flowers. The pseudanthium has a whorl of bracts below the flowers.

At a glance, a pseudanthium (inflorescence) looks just like a normal flower, but closer inspection shows it is composed of multiple flowers. Thus, the pseudanthium represents an evolution of the inflorescence to a reproductive unit that may function in pollination like a single flower, at least in plants that are animal pollinated. The advantage of this "flower" is that it produces far more seeds than a normal flower, but needs only one act of pollination.

Head
This is an equivalent term for flower head and pseudanthium when used in the botanical sense.

Capitulum (plural capitula)
Capitulum can be used as an exact synonym for pseudanthium and flower head. Its use is generally restricted to the Asteraceae family, though at least one source defines it as a small flower head. In addition to its botanical use as a term meaning flower head it is also used to mean the top of the sphagnum plant.

All content from Kiddle encyclopedia articles (including the article images and facts) can be freely used under Attribution-ShareAlike license, unless stated otherwise. Cite this article:
Pseudanthium Facts for Kids. Kiddle Encyclopedia.