Korean cuisine came from very old traditions in Korea. It has developed through many environmental, political, and cultural changes. There are special rules for eating meals in Korea.

Korean cuisine is mostly made up of rice, noodles, vegetables, and meats. Most Korean meals have many side dishes (called banchan) along with their steam-cooked rice. Kimchi is usually eaten at every meal. Sesame oil, doenjang, soy sauce, salt, garlic, ginger, pepper and gochujang are ingredients that are often used in the food.

In different provinces of Korea, its ingredients and dishes are different, too. The Korean royal court cuisine used to serve all the best dishes from each province for the royal family. People follow special rules when they eat meals in Korea. 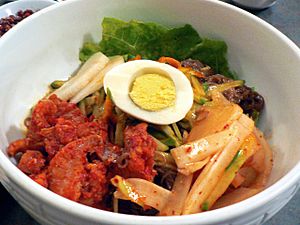 The oldest people are usually served first, and it is thought rude to pick up chopsticks or eat before the oldest people do so. In Korea, unlike in China and Japan, the rice bowl is not lifted up from the table. Spoons should not hit bowls while eating. Some rules are now not important. For instance, talking used to be discouraged, but today people usually talk together at meals. Also, men usually ate at a different table than women, but now they eat all together.

In Korea, they have both spoons and chopsticks, and together they are called sujeou (pronounced soo-juh). Usually, before they eat, people say, "Jalmukgessemnidah" (to show appreciation to the person who prepared for the food). Soups and stews must be set on the right side of the person who is eating. 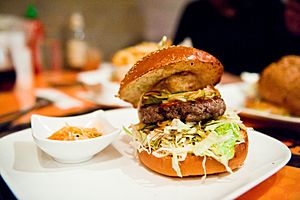 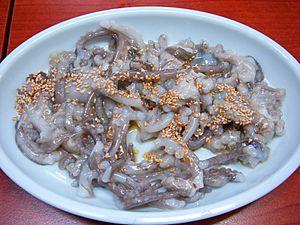 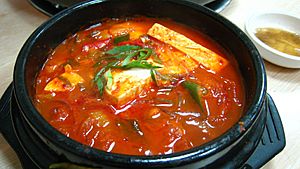 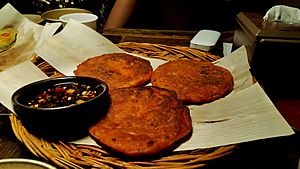 Grain dishes
Usually made with rice, which is the main meal 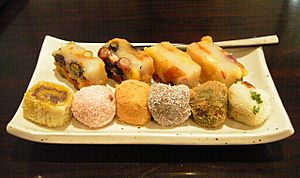 Traditional rice cakes like tteok are eaten as treats during holidays and festivals. Tteok means all rice cakes made from pounded rice, pounded glutinous rice, or glutinous rice that has not been pounded. It is usually filled or covered with sweet mung bean paste, red bean paste, raisins, or a sweet, creamy filling made with sesame seeds, pumpkin, beans, pine nuts, and honey. Tteok is usually eaten for dessert or as a snack.

All content from Kiddle encyclopedia articles (including the article images and facts) can be freely used under Attribution-ShareAlike license, unless stated otherwise. Cite this article:
Korean cuisine Facts for Kids. Kiddle Encyclopedia.