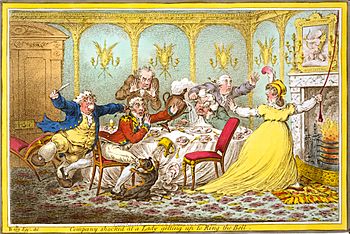 In Company Shocked at a Lady Getting up to Ring the Bell (1805) James Gillray caricatured "A widow and her suitors, who seem to have forgot their manners in the intensity of their admiration."

Etiquette, one aspect of decorum, is a code that rules how everyone is expected to behave, according to the social conventions and norms, in society, in a social class, or group. It is usually unwritten, but it may be put in written form. Because they are a product of the society's culture and history, the rules of etiquette are very different from time to time, and from one place and social group to another.

All content from Kiddle encyclopedia articles (including the article images and facts) can be freely used under Attribution-ShareAlike license, unless stated otherwise. Cite this article:
Etiquette Facts for Kids. Kiddle Encyclopedia.