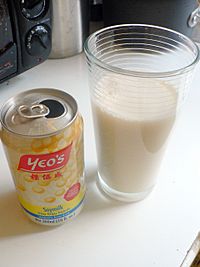 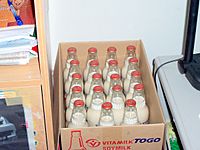 Soy milk, also known as soymilk and soya milk, is a plant-based drink produced by soaking and grinding soybeans, boiling the mixture, and filtering out remaining particulates. It is a stable emulsion of oil, water, and protein. Its original form is a natural by-product of the manufacture of tofu. It became a common beverage in Europe and North America in the later half of the 20th century, especially as production techniques were developed to give it taste and consistency more closely resembling dairy milk. Along with similar vegetable-based "milks", like almond and rice milk, soy milk may be used as a substitute for dairy milk by individuals who are vegan or lactose intolerant, while others may consume it from environmental or health concerns.

All content from Kiddle encyclopedia articles (including the article images and facts) can be freely used under Attribution-ShareAlike license, unless stated otherwise. Cite this article:
Soy milk Facts for Kids. Kiddle Encyclopedia.