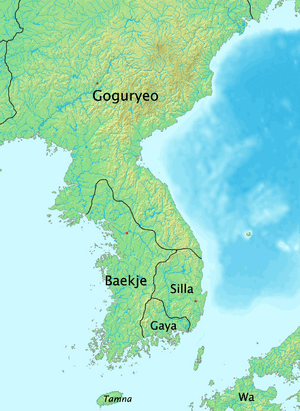 Baekje was ancient kingdom on the Korean Peninsula from 18 BCE to 660 CE. Baekje was also called Nam Buyeo. According to the Samguk Sagi, a historical record published in ancient Korea, Baekje was founded by Onjo at Wirye-sung (the present-day Han River area in Seoul). Baekje was one of the three kingdoms of Korea together with Goguryeo and Silla. Beakje, Goguryeo and Silla tried to expand each of their lands by allying and making war against one another.

In the 4th century, Beakje conquered almost every southern part of the Korean Peninsula and flourished by accepting Buddhism and reforming its system. Also, due to its advantageous natural environment, Baekje easily traded with China and Japan. Especially Baekje established goodwill relationships with Japanese rulers of the Kufun period and transmitted its advanced culture such as pottery and Buddhism to Japan.

All content from Kiddle encyclopedia articles (including the article images and facts) can be freely used under Attribution-ShareAlike license, unless stated otherwise. Cite this article:
Baekje Facts for Kids. Kiddle Encyclopedia.