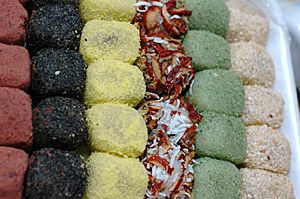 Tteok is a Korean traditional rice cake which is made of rice flour by kneading it with water. It tastes chewy and sticky. Tteok is usually only eaten on holidays or birthdays.

Koreans eat Tteok depending on the season. On the first day of the year, they make Garaetteok which is shaped like a long white cylinder because it looks like a white thin thread that represents a long life generally in Asian culture. Sliced Garaetteok is used for making a soup named Tteokguk. In March, women make small sweet Korean pancakes called Hwajeon with flowers. They use flowers such as azaleas and chrysanthemums. On Chuseok holiday, Korean Thanksgiving Day, Koreans make Songpyeon. They dough rice flour and stuff sesame, bean or chestnut into each. After they put it in, they shape it into a half moon.

All content from Kiddle encyclopedia articles (including the article images and facts) can be freely used under Attribution-ShareAlike license, unless stated otherwise. Cite this article:
Tteok Facts for Kids. Kiddle Encyclopedia.