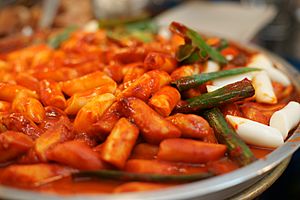 Tteokbokki is divided into gungjung tteokbokki and general tteokbokki as one of Korean street foods.

Gungjung tteokbokki (Korean: 궁중떡볶이) is made by frying beef and rice cake with soy sauce. It was developed in gungjung which means a Korean court.

jja-jang tteokbokki (Korean: 짜장떡복이) is a stir-fried dish with jjajang.

All content from Kiddle encyclopedia articles (including the article images and facts) can be freely used under Attribution-ShareAlike license, unless stated otherwise. Cite this article:
Tteokbokki Facts for Kids. Kiddle Encyclopedia.