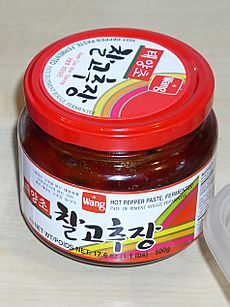 A jar of gochujang.

Gochujang (Korean: 고추장) is a savory, fermented Korean food. It is made from red chili, glutinous rice, fermented soybeans and salt. It is used to add flavour to a variety of Korean foods such as bibmbab (Korean: 비빔밥), bulgogi (Korean: 불고기), and tteokbokki (Korean: 떡볶이).

The main ingredients of gochujang are red chili powder, glutinous rice powder mixed with powdered fermented soybeans, and salt. Each serving contains 8.9% of protein, 4.1% lipid, 15.9% of carbohydrate, and 3.5% of fibre. It has more Vitamin B than doenjang and ganjang. It contains 5mg of Vitamin C per gram and 2,445mg of carotene per 100 gram.

One peculiar ingredient is capsaicin which is main cause of hot taste. Some people put salted fish or meat into gochujang.

Gochujang (hot pepper paste) has been made since chili was introduced from Japan in 1592, during the middle period of the Chosun Dynasty (Korean: 조선 왕조). According to Jung-Bo-Sal-Lim-Kyung-Jae (Korean: 증보살림경제), written in 1766, it was made from beans, sweet from glutinous rice, hot from red peppers, and salty. Since that time, making gochujang became rapidly popular. In Nong-Ga-Wol-Lyung-Ga (Korean: 농가월령가), there is content regarding making it.

Made by mixing glutinous rice powder with powdered fermented soybeans red peppers, which are the basic ingredients of Gochujang.

made by adding kaoliang.

made by adding barley. Popularly used as Ssam-Jang (쌈장) in summer.

All content from Kiddle encyclopedia articles (including the article images and facts) can be freely used under Attribution-ShareAlike license, unless stated otherwise. Cite this article:
Gochujang Facts for Kids. Kiddle Encyclopedia.