The Korean language (Korean), is spoken mainly in North and South Korea. It is spoken by more than 78 million people (most of whom are North or South Koreans).

In South Korea, it is called han'gukmal or han'gugeo. In North Korea, however, it is called chosŏnmal or chosŏnŏ. They are named differently because the common names for North and South Korea are different. In additional, Koreans usually call their language, "our language" or "our country's language". 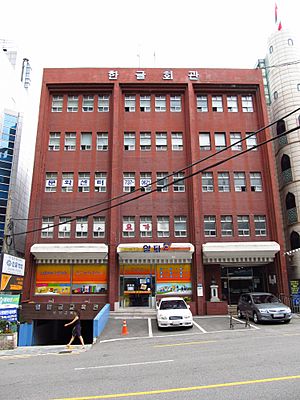 The headquarters of Korean Language Society in Seoul

Hanja is the system of Chinese characters that are used in Korean. Hanja was the only way to write Korean before the creation of Hangeul in the 15th century, and it was common in novels before the 19th century. 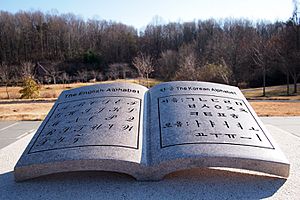 Korean alphabet displayed on a book made out of stone

Despite the fact that King Sejong the Great led the development of Hangeul in order to allow literacy to spread among common people and to create a writing system that more accurately represented the Korean language than Hanja, it was not adopted by the upper classes of Koreans, and therefore Hanja would continue to be the official writing system util the late 19th century.

Despite it being rejected by the elite classes, Hangeul was used often by lower classes as a way to write down Korean literature and for lower classes to communicate with each other.

All content from Kiddle encyclopedia articles (including the article images and facts) can be freely used under Attribution-ShareAlike license, unless stated otherwise. Cite this article:
Korean language Facts for Kids. Kiddle Encyclopedia.