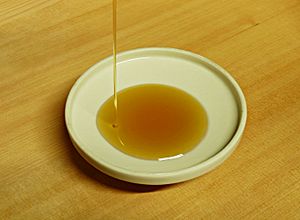 Sesame oil is a vegetable oil made from the sesame plant. It is used a lot in Asian cooking.

The English term sesame traces back to the Arabic simsim, Coptic semsem, and early Egyptian semsent. Semsent was listed in the Ebers Papyrus, a 65-feet-long scroll listing ancient herbs and spices discovered by the famous German Egyptologist, Ebers. The earliest recorded use of a spice - sesame seed - comes from an Assyrian myth which claims that the gods drank sesame wine the night before they created the earth. Sesamum indicum, (indicum meaning "from India") is native to the East Indies. Usage dates back to 3000 B.C. Over 5,000 years ago, the Chinese burned sesame oil not only as a light source but also to make soot for their ink-blocks. African slaves brought sesame seeds, which they called benné seeds, to America, where they became a popular ingredient in southern dishes. Through the ages, the seeds have been a source of food and oil. Sesame seed oil is still the main source of fat used in cooking in the Near East and Far East.

Good sesame oil has a strong smell when it is opened. The color should be bright brown or gold. It should be kept at 18 to 22 °C (64 to 72 °F). If it is too cold, the oil would be solid and lose its smell. Sesame oil can go bad if it is exposed to air and sunlight. Therefore it is better kept on a shelf or a sideboard. A dark brown bottle is better than a plain one, because the brown one can protect the oil from the sunlight better. The bottle should be closed tightly to keep air out.

Many things affect the price. Oil content is the most important. Usually a bottle of sesame oil has 40~55%. The more oil content it has, the higher price it has. Another element is country of origin. Also if you buy it made from a factory it would cost less than oil made in a country house by a farmer.

All content from Kiddle encyclopedia articles (including the article images and facts) can be freely used under Attribution-ShareAlike license, unless stated otherwise. Cite this article:
Sesame oil Facts for Kids. Kiddle Encyclopedia.