Jeonju is the 16th largest city in South Korea and the capital of North Jeolla Province. It is both urban and rural due to the closeness of Wanju County which almost entirely surrounds Jeonju. (Wanju County has many residents who work in Jeonju.) The name Jeonju literally means "Perfect Region". It is an important tourist center famous for Korean food, historic buildings, sports activities, and innovative festivals.

In May 2012, Jeonju was chosen as a Creative Cities for Gastronomy as part of UNESCO's Creative Cities Network. This honour recognizes the city's traditional home cooking handed down over thousands of years, its active public and private food research, a system of nurturing talented chefs, and its hosting of distinctive food festivals. 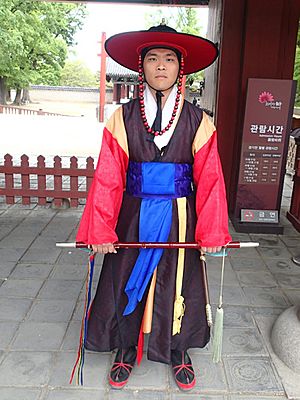 In the fertile Honam plain, famous for Jeonju Hanok Village and exceptional produce, Jeonju has been an important regional center in the province for centuries. The city was the capital of Hubaekje Kingdom, which was founded by Gyeon Hwon. It was regarded as the spiritual capital of the Joseon Dynasty because the Yi royal family originated there. The Chŏnju Kim in North Korea, who Kim Il-sung was descended from, have their ancestral seat (Bon-gwan) in Jeonju as well. 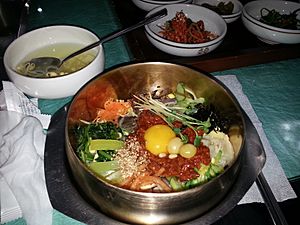 The local mountains and parks are popular for outdoor recreation due to its rural location. There are historical sites in the area. The city has a zoo, a park, and the Hanguk Sound and Culture Hall, a large, modern concert complex on the Chonbuk National University campus.

All content from Kiddle encyclopedia articles (including the article images and facts) can be freely used under Attribution-ShareAlike license, unless stated otherwise. Cite this article:
Jeonju Facts for Kids. Kiddle Encyclopedia.