The azuki bean is a type of reddish-brown colored bean. It can also be spelled adzuki. The bean is grown in East Asia and the Himalayas. It is often boiled in sugar to make a red bean paste. This paste is used in Chinese, Korean, and Japanese cooking.Azuki beans are eaten in many places in the world. Especially, azuki beans are used in sweet meals, snacks and dishes in Japan, China, Korea and Vietnam. Azuki beans have a long and varied history and there are many recipes.

Azuki beans are very famous red beans in Japan. Excavations suggest that people have been eating Azuki beans since the Jomon period. At that time, Azuki beans were called "shozu".

Azuki beans have been grown since the Yayoi period. The first time the word "Azuki" was used was in the book "Koziki". Old Japanese said "Aka" for red. And Azuki beans were called "zuki" because Azuki beans get soft when they are boiled. "Aka" plus "zuki" is "Azuki" and this is the origin of Azuki bean's name. Another Azuki beans has many origins.

Azuki beans make bean jam. A sweet porridge of boiled and crushed azuki beans are eaten with rice-flour dumplings. Oval-shaped sweets are made from glutinous rice and covered with azuki bean. Bean-jam pancakes and bean-jam filled buns are also popular snacks. Azuki beans are also used in pillows and beanbags. 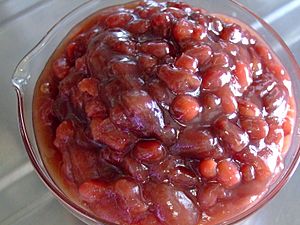 First, the azuki beans are boiled until the azuki skin stretches. The beans are then put into a perforated basket. Next, the azuki are boiled again for a short time to remove harshness. They are again put into perforated basket to drain. While they are draining, a big pan for steaming is prepared. The azuki are put in the pan and covered with a lid. The azuki beans are steamed and then heat is turned off. After steaming you have azuki bean mash, which is then dried on a cloth. The next step is putting them back in a pan to bring to a hot temperature. The azuki are taken out of the pan which is hot from flame. Sugar is added. The sugar and azuki are mixed and the water from the azuki is left. Finally, the azuki is cooled. When the beans are cold, it is finished.

Azuki bean jam is used in many foods. For example, a fish-shaped waffle is filled with azuki bean jam. Azuki bean jam foods are famous in Japan, and they are eaten by many Japanese.

All content from Kiddle encyclopedia articles (including the article images and facts) can be freely used under Attribution-ShareAlike license, unless stated otherwise. Cite this article:
Azuki bean Facts for Kids. Kiddle Encyclopedia.