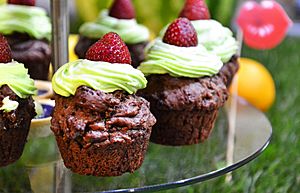 A muffin is a small bread- or cake-like baked food. Muffins are similar to cupcakes: they have round bases, rounded tops, and are usually sweet, but there are also savory kinds (like cornbread muffins). A muffin can also mean a different baked food, the smaller, disk-shaped English muffin, although this is not common outside Britain. In Britain, the term can mean either type of muffin. Muffins can also have extra ingredients to its flavour, such as blueberries or chocolate chips. Muffins are usually eaten at breakfast but can be eaten at any other meal. It is usually served with tea.

Quickbread muffins (known in Britain as "American muffins" or simply as "muffins") originated in the United States in the mid-19th century. The use of the term to describe what are essentially cup cakes or buns did not become common usage in Britain until the last decades of the 20th century on the back of the spread of coffee shops such as Starbucks. (There is lingering resistance in the UK to the term as being inapplicable to cakes.) They are similar to cupcakes in size and cooking methods, the main difference being that cupcakes tend to be sweet desserts using cake batter and which are often topped with sugar icing (American frosting). Muffins are available in both savoury varieties, such as cornmeal and cheese muffins, or sweet varieties such as blueberry, chocolate chip, lemon or banana flavours. They are often eaten as a breakfast food, often accompanied by coffee or tea. Fresh baked muffins are sold by bakeries, donut shops and some fast food restaurants and coffeehouses. Factory baked muffins are sold at grocery stores and convenience stores and are also served in some coffee shops and cafeterias.

Recipes for quick bread muffins are common in 19th-century American cookbooks. Recipes for yeast-based muffins, which were sometimes called "common muffins" or "wheat muffins" in 19th-century American cookbooks, can be found in much older cookbooks. In her Boston Cooking-School Cook Book, Fannie Farmer gave recipes for both types of muffins, both those that used yeast to raise the dough and those that used a quick bread method, using muffin rings to shape the English muffins. Farmer indicated that stove top "baking", as is done with yeast dough, was a useful method when baking in an oven was not practical.

Quickbread muffins are made with flour, sieved together with bicarbonate of soda as a raising agent. To this is added butter, eggs and any flavourings (fruit, such as blueberries, chocolate or banana; or savouries, such as cheese). The mix is turned into a pocketed muffin tray, or into individual paper moulds, and baked in an oven. The result are raised, individual quickbreads.

Flatbread muffins (known in the United States and elsewhere as "English muffins", or simply 'muffins' in Britain) were first mentioned in literature in the early 18th century, although the product is undoubtedly older than that. The word "muffin" is thought to derive from the German mouffin.

This product is a flatter disk-shaped, typically unsweetened bread of English or European origin. These muffins are popular in Commonwealth countries and the United States. Flatbread muffins are often served toasted for breakfast. They may be served with butter or margarine, and topped with sweet toppings, such as jam or honey, or savoury toppings (e.g., round sausage, cooked egg, cheese or bacon). Flatbread muffins are typically eaten as a breakfast food.

The flatbread muffin is a type of yeast-leavened bread; generally about 4 in (10 cm) round and 1.5 in (3.8 cm) tall. Rather than being oven-baked, they are cooked in a griddle on the stove top and flipped from side-to-side, which results in their typical flattened shape rather than the rounded top seen in baked rolls or cake-type muffins. Flatbread muffins were known to American settlers, but declined in popularity with the advent of the quickbread muffin. They were re-introduced to the American market in 1880 as "English muffins" by English-American baker Samuel Beth Thomas (whose baked-goods company Thomas' survives to this day).

The name is first found in print in 1703, spelled moofin; it is of uncertain origin but possibly derived from the Low German Muffen, the plural of Muffe meaning a small cake, or possibly with some connection to the Old French moufflet meaning soft as said of bread.

This photo is a sequence showing the preparation of a flatbread muffin based on a recipe by Alton Brown in "The Muffin Man" episode of the television cooking show Good Eats.

All content from Kiddle encyclopedia articles (including the article images and facts) can be freely used under Attribution-ShareAlike license, unless stated otherwise. Cite this article:
Muffin Facts for Kids. Kiddle Encyclopedia.