A cupcake (also British English: fairy cake; Hiberno English: bun; Australian English: fairy cake or patty cake) is a small cake designed to serve one person, which may be baked in a small thin paper or aluminum cup. As with larger cakes, icing and other cake decorations, such as candy, may be applied.

The first mention of the cupcake can be traced as far back as 1796, when a recipe notation of "a cake to be baked in small cups" was written in American Cookery. The earliest documentation of the term cupcake was in "Seventy-five Receipts for Pastry, Cakes, and Sweetmeats" in 1828 in Eliza Leslie's Receipts cookbook.

In the early 19th century, there were two different uses for the name cup cake or cupcake. In previous centuries, before muffin tins were widely available, the cakes were often baked in individual pottery cups, ramekins, or molds and took their name from the cups they were baked in. This is the use of the name that has remained, and the name of "cupcake" is now given to any small cake that is about the size of a teacup. While English fairy cakes vary in size more than American cupcakes, they are traditionally smaller and are rarely topped with elaborate icing. 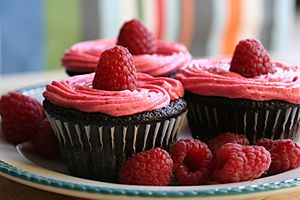 Chocolate cupcakes with raspberry buttercream icing topped with a raspberry 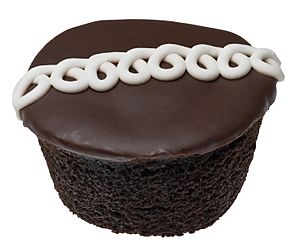 A standard cupcake uses the same basic ingredients as standard-sized cakes: butter, sugar, eggs, and flour. Nearly any recipe that is suitable for a layer cake can be used to bake cupcakes. The cake batter used for cupcakes may be flavored or have other ingredients stirred in, such as raisins, berries, nuts, or chocolate chips.

Because their small size is more efficient for heat conduction, cupcakes bake much faster than a normal layered cake.

Cupcakes may be topped with frosting or other cake decorations. They may be filled with frosting, fruit, or pastry cream. For bakers making a small number of filled cupcakes, this is usually accomplished by using a spoon or knife to scoop a small hole in the top of the cupcake. Another method is to just insert the pastry bag in the middle of the cupcake. In commercial bakeries, the filling may be injected using a syringe. Elaborately decorated cupcakes may be made for special occasions. 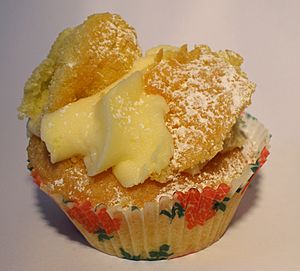 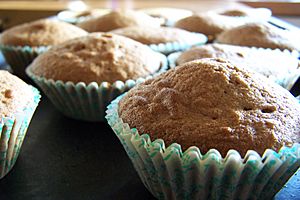 Cupcakes may be plain cakes without any frosting or other decoration. These were baked on a flat baking sheet in a double-layer of paper cupcake liners 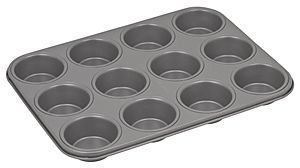 A cupcake pan, made of tinned steel

Cupcakes are usually baked in muffin tins. These pans are most often made from metal, with or without a non-stick surface, and generally have six or twelve depressions or "cups". They may also be made from stoneware, silicone rubber, or other materials. A standard size cup is 3 inches (76 mm) in diameter and holds about 4 ounces (110 g), although pans for both miniature and jumbo size cupcakes exist. Specialty pans may offer many different sizes and shapes.

Individual patty cases, or cupcake liners, may be used in baking. These are typically round sheets of thin paper pressed into a round, fluted cup shape. Liners can facilitate the easy removal of the cupcake from the tin after baking, keep the cupcake more moist, and reduce the effort needed to clean the pan. The use of liners is also considered a more sanitary option when cupcakes are being passed from hand to hand. Like cupcake pans, several sizes of paper liners are available, from miniature to jumbo.

In the early 21st century, a trend for cupcake shops, which are specialized bakeries that sell little or nothing except cupcakes, developed in the United States, playing off of the sense of nostalgia evoked by the cakes. Crumbs Bake Shop, a publicly traded business runs the largest cupcake shop chain in the U.S. Based in Beverly Hills, California, Sprinkles Cupcakes is owned by Candace Nelson, who is also a star judge on the Food Network's Cupcake Wars.

Cupcakes are sometimes used to celebrate and illustrate specific events or themes. 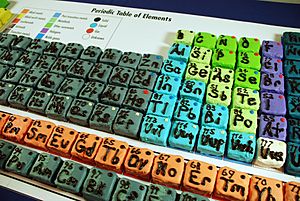 Based on her original idea, periodic table cupcakes have become a popular and fun way to celebrate chemistry at school bake sales and events aiming to promote public engagement with science.

All content from Kiddle encyclopedia articles (including the article images and facts) can be freely used under Attribution-ShareAlike license, unless stated otherwise. Cite this article:
Cupcake Facts for Kids. Kiddle Encyclopedia.