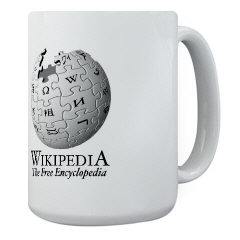 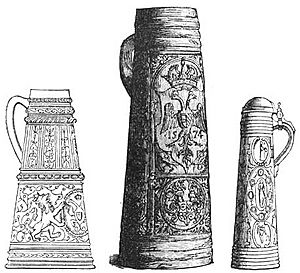 A mug is a container for drinking. It has one handle on the side. It is usually made of ceramic or steel. People might talk about getting a mug of beer at a local pub. They might also drink a mug of coffee in the morning. 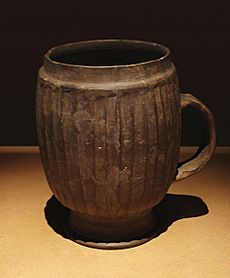 Wooden mugs were produced probably from the oldest time, but most of them have not survived intact.

The first pottery was shaped by hand and was later facilitated by invention of the potter's wheel (date unknown, between 6,500 and 3000 BCE). It was relatively easy to add a handle to a cup in the process thus producing a mug. For example, a rather advanced, decorated clay mug from 4000–5000 BCE was found in Greece.

Ancestral Pueblo (Anasazi) mugs from SW Colorado, made between 1000 and 1280 CE. The meaning of the carving in the handles is yet unknown, but it is probably not functional.

The biggest disadvantage of those clay mugs was thick walls unfit for the mouth. The walls were thinned with development of metalworking techniques. Metal mugs were produced from bronze, silver, gold, and even lead, starting from roughly 2000 BCE, but were hard to use with hot drinks.

The invention of porcelain around 600 CE in China brought a new era of thin-walled mugs suitable both for cold and hot liquids, which are enjoyed today. 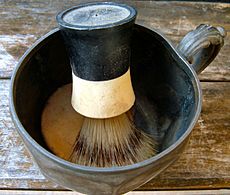 A shaving scuttle and shaving mug were developed around the 19th century; the first patent for a shaving mug is dated 1867. As hot water was not common in many households, one way to provide hot lather was to use a scuttle or mug. A traditional scuttle resembles a teapot with a wide spout where hot water is poured in; this is where it differs from a shaving mug, which has no spout. Both shaving scuttles and mugs usually have a handle, but some have none. Shaving mugs often look like a standard mug, however, some also have a built in brush rest, so the brush does not sit in lather. Modern versions of the scuttle are in limited production, usually by independent potters working in small volumes. 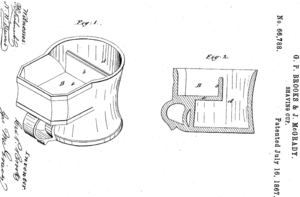 At the top of the scuttle or mug is a soap holder. Traditionally, it was used with a hard block of shaving soap (rather than soft soap or cream) and therefore had drain holes at the bottom. Later scuttles and mugs do not include the holes, and thus can be used with creams and soft soaps. Some scuttles and mugs have concentric circles on the bottom, which retain some water thus helping to build lather.

In use, the shaving brush is dunked into the wide spout, allowing it to soak into the water and heat up. The soap is placed in the soap holder. When needed, one can take the brush and brush it against the soap, bringing up a layer of lather; excess water is drained back. This allows conservation of water and soap, whilst retaining enough heat to ensure a long shave. 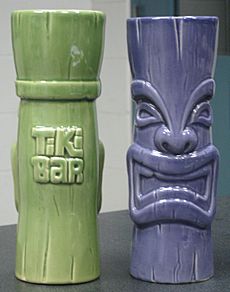 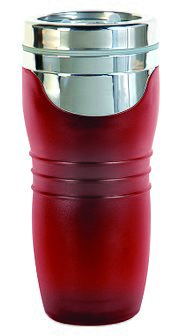 Travel mugs (introduced in the 1980s) generally employ thermal insulation properties for transporting hot or cold liquids. Similar to a vacuum flask, a travel mug is usually well-insulated and completely enclosed to prevent spillage or leaking, but will generally have an opening in the cover through which the contents can be consumed during transportation without spillage. As the primary mechanism by which hot (not warm) beverages lose heat is evaporation a lid, even a thin plastic one as used on disposable coffee cups which conducts heat quite quickly, also serves a vital role in keeping the drink hot.

Mugs with inner and outer walls, but not vacuum treated, are generally called double wall mugs. Usually stainless steel will be used for the inner wall while outer wall can be stainless steel, plastic, or even embedded with other materials. 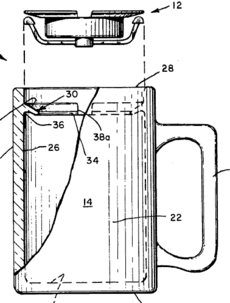 Mugs designed for usage when driving are called auto mugs or commuter mugs, as they enable users to enjoy a beverage while driving. Travel mugs have a spill-proof lid with a sipping opening and in many cases, a narrower base, so that they will fit into the cup-holders that are built into many vehicles.

All content from Kiddle encyclopedia articles (including the article images and facts) can be freely used under Attribution-ShareAlike license, unless stated otherwise. Cite this article:
Mug Facts for Kids. Kiddle Encyclopedia.