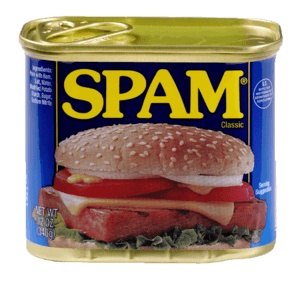 A can of spam

Spam is a canned meat food made by the Hormel Foods Corporation. It is made from pork shoulder meat and ham. Spam Lite, a newer kind of Spam, is made with pork and chicken.

There have been many ideas about what the word "Spam" means. The Hormel Foods Corporation once said that it means "Shoulder of Pork and Ham", but in some dictionaries "Spam" means "SPiced hAM".

Spam was used a lot in World War II, as there wasn't proper meat. Because of that, spam was used as a rationed item.

All content from Kiddle encyclopedia articles (including the article images and facts) can be freely used under Attribution-ShareAlike license, unless stated otherwise. Cite this article:
Spam (food) Facts for Kids. Kiddle Encyclopedia.