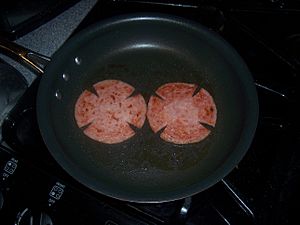 Two slices of pork roll, frying in a pan

Pork roll is a processed meat commonly available in New Jersey and neighboring states. It was developed in 1856 by John Taylor of Trenton, and sold as "Taylor's Prepared Ham" until 1906. Other producers entered the market, and subsequent food labeling regulations required Taylor to designate it as "pork roll" alongside its competitors. In regions of North and Central Jersey, all brands of pork roll may be referred to colloquially as "Taylor Ham". 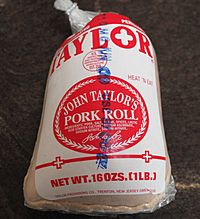 While a similar item, packed minced ham, may have been produced in the later 1700s, John Taylor is credited with creating his secret recipe for the product in 1856. George Washington Case, a farmer and butcher from nearby Belle Mead, created his own recipe for pork roll in 1870. Case's was reportedly packaged in corn husks.

Taylor originally called his product "Taylor's Prepared Ham", but was forced to change the name after it failed to meet the new legal definition of "ham" established by the Pure Food and Drug Act of 1906. Marketed as both "Taylor's Pork Roll" and "Trenton Pork Roll", it saw competition from products with similar names like "Rolled Pork" and "Trenton style Pork Roll". Of particular note is the "Roll of Pork" produced by Adolph Gobel, the "Sausage King" of Brooklyn. Gobel was sued by Taylor in 1910, but the court ruled that the words "Pork Roll" and "Roll of Pork" could not be trademarked.

A century later, many in North Jersey (and parts of Central Jersey) continue to use the term "Taylor ham".

Being both a regional specialty and a processed meat with a unique taste, Pork roll has resisted accurate description and is sometimes referred to as a mystery meat.

The 1910 legal opinion which established the generic term "pork roll" described the product as:

a food article made of pork, packed in a cylindrical cotton sack or bag in such form that it could be quickly prepared for cooking by slicing without removal from the bag.

Both the "cylindrical cotton sack" and vacuum-sealed sliced forms are widely available in the region. Variations on this, including hot dog sized "pork roll links"

Larry Olmsted of USA Today has described the taste of the meat as "a cross between Canadian bacon and bacon, less hammy and smoky than Canadian, fattier and saltier than bacon, with a unique texture, both crispy and slightly mushy."

Each producer maintains their own recipe, however there are generally 2 flavors of the product, Tangy and Mild. Compared to Mild, Tangy has more of a salami-like lactic acid flavor. 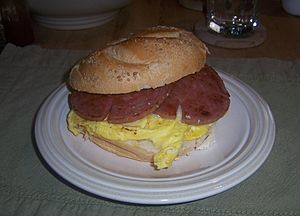 A "Jersey Breakfast" of pork roll, egg, and cheese 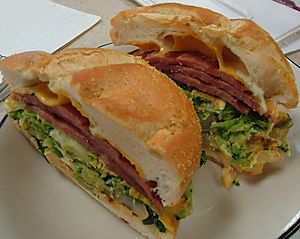 A sandwich featuring pork roll at a delicatessen in New Jersey

Though the packages commonly suggest barbecuing or grilling the product, pork roll is most often prepared by frying slices in a pan or on a griddle. No oil or butter is necessary. Slices of pork roll naturally curl up into a cup shape as they are heated. To make the slices lay flat, as many as four inward cuts from the edge towards the center are commonly made, leading to a distinctive shape once cooked. The product is ready once it is hot and a bit of crispiness has developed.

Pork roll is typically eaten as part of a sandwich and frequently paired with egg and/or cheese. A popular breakfast sandwich in the region is the "Taylor ham, egg and cheese" or "pork roll, egg and cheese" in which fried pork roll is joined with a fried (or scrambled) egg and American cheese and served on a hard roll, bagel or English muffin. New Jersey eateries noted for their Jersey Breakfast include Slater's in Middletown, and Starks United in Keansburg. Popular condiments include black pepper, ketchup, mustard, hot sauce, lettuce, and tomato.

It is also incorporated in many other recipes, such as the "Jersey Burger", a Pork Roll Monte Cristo, or a variation on deviled eggs.

All content from Kiddle encyclopedia articles (including the article images and facts) can be freely used under Attribution-ShareAlike license, unless stated otherwise. Cite this article:
Pork roll Facts for Kids. Kiddle Encyclopedia.