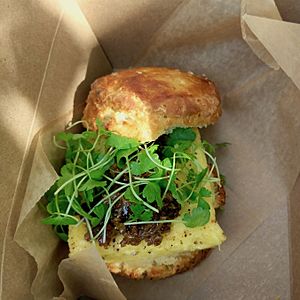 A breakfast sandwich featuring eggs, bacon jam, and microgreens on a buttermilk biscuit

Breakfast sandwiches are typically made using breakfast meats (generally cured meats such as sausages, patty sausages, bacon, country ham, scrapple, Spam, and pork roll), breads, eggs and cheese. These sandwiches were typically regional specialties until fast food restaurants began serving breakfast. Because the common types of bread, such as biscuits, bagels, and English muffin, were similar in size to fast food hamburger buns, they made an obvious choice for fast food restaurants. Unlike other breakfast items, they were perfect for the innovation of the drive-through. These sandwiches have also become a staple of many convenience stores.

Although the ingredients for the breakfast sandwich have been common elements of breakfast meals in the English-speaking world for centuries, it was not until the 19th century in the United States that people began regularly eating eggs, cheese, and meat in a sandwich. What would later be known as "breakfast sandwiches" became increasingly popular after the American Civil War, and were a favorite food of pioneers during American westward expansion. The first known published recipe for a "breakfast sandwich" was in an 1897 American cookbook.

A New-York-style bacon and egg sandwich on a roll

There are several types of bread used to make breakfast sandwiches:

All content from Kiddle encyclopedia articles (including the article images and facts) can be freely used under Attribution-ShareAlike license, unless stated otherwise. Cite this article:
Breakfast sandwich Facts for Kids. Kiddle Encyclopedia.