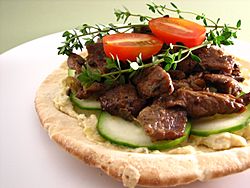 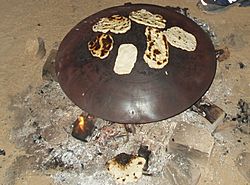 Pita roasted on an outdoor fire.

Pita is a kind of flat bread. Sometimes it is called pitta or pide (Turkish), pitka (Bulgarian) and pronounced "pitta" in Greek). Pita is an often round, brown, wheat flatbread made with yeast.

Pita is traditionally made in the Middle East and around the Mediterranean. It is also used in the cuisines of these countries. It can also be found in North Africa and the Levant.

Possibly it was spread by the Ancient Greek city states colonies, or by the spread of the Islam through the region.

In Greek cuisine, pita may refer to thicker breads made with yeast, for example souvlaki pita. It may also refer to foods using many thin layers of dough, usually with many different ingredients in between. That way, pies such as tyropita and spanakopita or sweet pies such as baclava are made.

The Indian flatbread form of roti is sometimes referred to as "Indian pita".

All content from Kiddle encyclopedia articles (including the article images and facts) can be freely used under Attribution-ShareAlike license, unless stated otherwise. Cite this article:
Pita Facts for Kids. Kiddle Encyclopedia.