Trenton dates back at least to June 3, 1719, when mention was made of a constable being appointed for Trenton, while the area was still part of Hunterdon County. Boundaries were recorded for Trenton Township as of March 2, 1720, a courthouse and jail were constructed in Trenton around 1720 and the Freeholders of Hunterdon County met annually in Trenton. Trenton became New Jersey's capital as of November 25, 1790, and the City of Trenton was formed within Trenton Township on November 13, 1792. Trenton Township was incorporated as one of New Jersey's initial group of 104 townships by an act of the New Jersey Legislature on February 21, 1798. On February 22, 1834, portions of Trenton Township were taken to form Ewing Township. The remaining portion of Trenton Township was absorbed by the City of Trenton on April 10, 1837. A series of annexations took place over a 50-year period, with the city absorbing South Trenton borough (April 14, 1851), portions of Nottingham Township (April 14, 1856), both the Borough of Chambersburg Township and Millham Township (both on March 30, 1888), as well as Wilbur Borough (February 28, 1898). Portions of Ewing Township and Hamilton Township were annexed to Trenton on March 23, 1900. 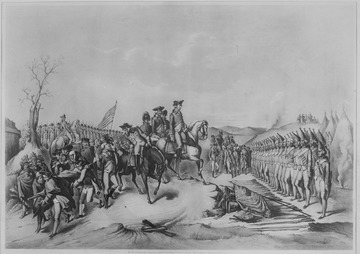 The surrender of the Hessians at Trenton, 1776 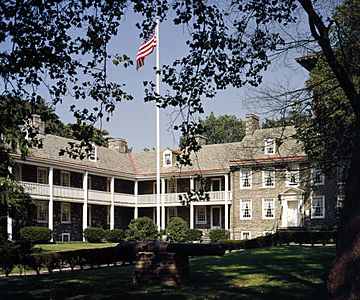 The first settlement which would become Trenton was established by Quakers in 1679, in the region then called the Falls of the Delaware, led by Mahlon Stacy from Handsworth, Sheffield, England. Quakers were being persecuted in England at this time and North America provided an opportunity to exercise their religious freedom.

By 1719, the town adopted the name "Trent-towne", after William Trent, one of its leading landholders who purchased much of the surrounding land from Stacy's family. This name later was shortened to "Trenton".

During the American Revolutionary War, the city was the site of the Battle of Trenton, George Washington's first military victory. On December 26, 1776, Washington and his army, after crossing the icy Delaware River to Trenton, defeated the Hessian troops garrisoned there. After the war, the Confederation Congress briefly met in Trenton in November and December 1784. While the city was preferred by New England and other northern states as a permanent capital for the new country, the southern states ultimately prevailed in their choice of a location south of the Mason–Dixon line.

Trenton became the state capital in 1790, but prior to that year the New Jersey Legislature often met here. The city was incorporated in 1792.

During the War of 1812, the United States Army's primary hospital was at a site on Broad Street.

Throughout the 19th century, Trenton grew steadily, as European immigrants came to work in its pottery and wire rope mills. In 1837, with the population now too large for government by council, a new mayoral government was adopted, with by-laws that remain in operation to this day. 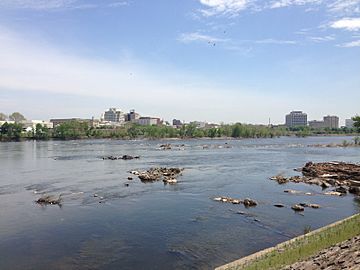 The "Falls of the Delaware" at Trenton

However, Mercer County constitutes its own metropolitan statistical area, formally known as the Trenton-Ewing MSA. Locals consider Trenton to be a part of an ambiguous area called Central Jersey, and thus part of neither region. They are generally split as to whether they are within New York or Philadelphia's sphere of influence. While it is geographically closer to Philadelphia, many people who have recently moved to the area commute to New York City, and have moved there to escape the New York region's high housing costs.

Trenton is one of two state capitals that border another state – the other being Carson City, Nevada.

Downtown Trenton from across the Delaware River. Note the gold top of the State House.

The city of Trenton is home to numerous neighborhoods and sub-neighborhoods. The main neighborhoods are taken from the four cardinal directions (North, South, East, and West). Trenton was once home to large Italian, Hungarian, and Jewish communities, but since the 1950s, demographic shifts have changed the city into a relatively segregated urban enclave of middle and lower income African Americans. Italians are scattered throughout the city, but a distinct Italian community is centered in the Chambersburg neighborhood, in South Trenton. This community has been in decline since the 1970s, largely due to economic and social shifts to the suburbs surrounding the city. Today Chambersburg has a large Latino community. Many of the Latino immigrants are from Mexico, Guatemala and Nicaragua. There is also a significant and growing Asian community in the Chambersburg neighborhood primarily made up of Burmese and Bhutanese/Nepali refugees.

The North Ward, once a mecca for the city's middle class, is now one of the most economically distressed, torn apart by race riots following the assassination of Martin Luther King in 1968. Nonetheless, the area still retains many important architectural and historic sites. North Trenton still has a large Polish-American neighborhood that borders Lawrence Township, many of whom attend St Hedwig's Roman Catholic Church on Brunswick Ave. St. Hedwig's church was built in 1904 by Polish immigrants, many of whose families still attend the church. North Trenton is also home to the historic Shiloh Baptist Church—one of the largest houses of worship in Trenton and the oldest African American church in the city, founded in 1888. The church is currently pastored by Rev. Darrell L. Armstrong, who carried the Olympic torch in 2002 for the Winter Olympics in Salt Lake City. Also located just at the southern tip of North Trenton is the city's Battle Monument, also known as "Five Points". It is a 150 ft (46 m) structure that marks the spot where George Washington's Continental Army launched the Battle of Trenton during the American Revolutionary War. It faces downtown Trenton and is a symbol of the city's historic past.

South Ward is the most diverse neighborhood in Trenton and is home to many Latin American, Italian-American, and African American residents.

West Ward is the home of Trenton's more suburban neighborhoods.

Neighborhoods in the city include: 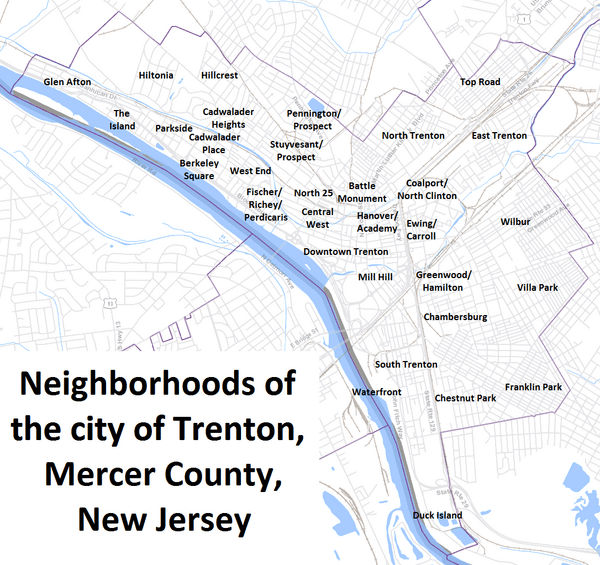 Top 10 ethnicities reported during the 2000 Census by percentage were: 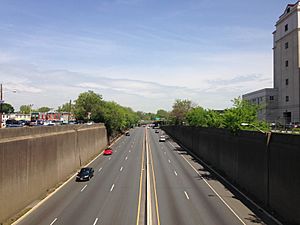 City highways include the Trenton Freeway, which is part of U.S. Route 1, and the John Fitch Parkway, which is part of Route 29. Canal Boulevard, more commonly known as Route 129, connects US Route 1 and NJ Route 29 in South Trenton. U.S. Route 206, Route 31, and Route 33 also pass through the city via regular city streets (Broad Street/Brunswick Avenue/Princeton Avenue, Pennington Avenue, and Greenwood Avenue, respectively). 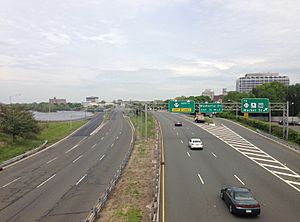 NJ 29 through downtown Trenton, with the Delaware River on the left

Routes 29 and 129 connect the city to Interstate 195 which provides connections with Interstate 295 and the New Jersey Turnpike (also known as Interstate 95).

Public transportation within the city and to/from its nearby suburbs is provided in the form of local bus routes run by NJ Transit. SEPTA also provides bus service to adjacent Bucks County, Pennsylvania.

Long-distance transportation is provided by Amtrak train service along the Northeast Corridor.

The closest commercial airport is Trenton–Mercer Airport in Ewing Township, about 8 miles (13 km) from the center of Trenton, which has been served by Frontier Airlines offering service to and from points nationwide. In January 2015, Frontier cited low demand as the reason behind its decision to cut service to five cities in the Midwest, leaving 13 destinations available to passengers.

All content from Kiddle encyclopedia articles (including the article images and facts) can be freely used under Attribution-ShareAlike license, unless stated otherwise. Cite this article:
Trenton, New Jersey Facts for Kids. Kiddle Encyclopedia.