The New Jersey State House is located in Trenton and is the capitol building for the U.S. state of New Jersey. Built in 1790, it is the third-oldest state house in continuous legislative use in the United States; only the Maryland State Capitol in Annapolis and the Virginia State Capitol in Richmond are older. The building houses both chambers of the Legislature (the Senate and the General Assembly), as well as offices for the Governor, Lieutenant Governor and several state government departments.

After the Legislature relocated to Trenton from Perth Amboy in 1790, it purchased land for £250 and 5 shillings. Construction on the new state house, designed by Philadelphia-based architect Jonathan Doane, began in 1792. The Doane building was covered in stucco, measured 150 by 50 feet (46 m × 15 m) and housed the senate and house chambers in opposite wings. To meet the demands of the growing state, the structure was expanded several times during the 19th century, by noted architects such as John Notman of Philadelphia who created office wing on north side in 1845 and Samuel Sloan, also of Philadelphia who designed new wings to house both legislative chambers in 1871. On March 21, 1885, a large fire destroyed the State Street wing. Lewis Broome, of Jersey City led the reconstruction of the building. He used a rare pigmented brick from the Lippincott Brick Co. of Farmingdale. The brick used was a one-of-a-kind color for the region.

The New Jersey State House attained its current size in 1911 when a four-story office block replaced the original 1792 structure. The only major change since has been modernization of the main corridor in 1950. A 1960 plan, called for the replacement of the oldest sections of the structure with modern legislative chambers, however it was never implemented. 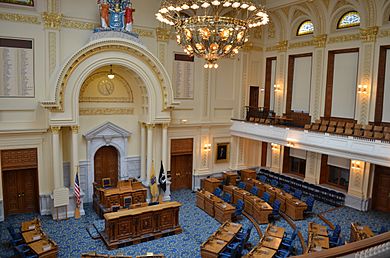 A renovation project began in 1987. The project restored the legislative section of the building and upgraded mechanical and electrical systems in the building. This began an ongoing effort to restore the oldest portions of the building.

The New Jersey State House is unusual among state capitol buildings in the United States, the majority of which are reminiscent of the US Capitol. The building consists of two parallel structures connected by the dome-capped rotunda, resembling the letter H, with its long arm parallel to State Street. A long portico wing, added by Notman and subsequently enlarged, extends west from the rotunda toward the Delaware River. To this portico, a number of architecturally dissimilar, unusually-shaped structures have been added. These structures have been the subject of subsequent renovations to blend them with the original wing. The State House is set not on a park-like campus, as are many state houses, rather it is integrated into an urban setting along historic State Street and is surrounded by other legislative buildings. The most scenic view of the building is from the west, near the Delaware River, and is the side dominated by the various additions. Viewed from State Street, the dome is scarcely visible and there is little sense of the scale or design of the building. The Governor's office occupies the remaining portion of the original 1792 State House.

Tours are offered daily Monday through Saturday, except state holidays. The tours typically include the Senate and Assembly chambers galleries, party conference rooms, the rotunda and Governor's Office reception room.

All content from Kiddle encyclopedia articles (including the article images and facts) can be freely used under Attribution-ShareAlike license, unless stated otherwise. Cite this article:
New Jersey State House Facts for Kids. Kiddle Encyclopedia.