Arm & Hammer Park, also known as Mercer County Waterfront Park, is a venue located in Trenton, New Jersey. It is the home baseball park for the Trenton Thunder, a collegiate summer baseball team of the MLB Draft League. They were previously a Double-A level Minor League Baseball team of the Eastern League (1980–2020). The official seating capacity is 6,150.

The park was built for the 1994 season, although it opened several weeks late due to a rough winter that hampered construction. The sod also was unable to take properly that season, and the field did not properly drain, leading to rainouts on evenings where the sun had been out since noon. The drainage problem was fixed in 1995.

The stadium's original name was "Mercer County Waterfront Park" when it opened in 1994. "Samuel J. Plumeri, Sr. Field" was added to the original name in 1999 by Trenton Thunder owner, Joe Plumeri (Chairman and CEO of Willis Group Holdings). Samuel J. Plumeri, Sr. was Joe Plumeri's father. In November 2012, the New Jersey-based Arm & Hammer purchased the ballpark's naming rights and will maintain its sponsorship through 2032.

In June 2014, the park hosted the first-ever, gold– and bronze–medal games in baseball for the Special Olympics USA National Games. In 2018, it hosted the Eastern League All-Star Game.

Arm & Hammer Park set a record for game attendance on July 3, 2011, when the Thunder played the Altoona Curve. The game had the fortune of falling on the Independence Day holiday weekend, as well as featuring an injury rehabilitation appearance by Derek Jeter of the New York Yankees. The official attendance for the game was 9,212.

When Alex Rodriguez played two games on back-to-back nights in August 2013, the official attendance was reported at 8,080 and 8,113, respectively.

While the outfield in left and center field is covered with advertising signs that obscure views of Route 29 and nearby houses, the right field fence was kept as a short structure so that fans could see the Delaware River and Pennsylvania beyond. The river is also an inviting target for left-handed sluggers, several of whom have deposited baseballs into the water. Similar to Great American Ball Park in Cincinnati, Ohio and its river border with Kentucky, Arm & Hammer Park also holds the possibility of having someone "hit one out of the state" since the middle of the Delaware River is the border with Pennsylvania.

On June 7, 1994, Tony Clark became the first player to hit a fair ball into the Delaware. 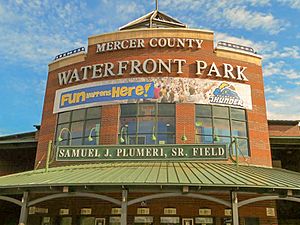 The exterior of Waterfront Park in Trenton.

The stadium anchors an area of rejuvenation in Trenton that also includes office buildings, nightclubs, and the CURE Insurance Arena, several blocks away, for ice hockey, basketball and arena football.