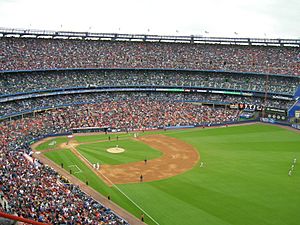 Shea Stadium prior to the start of a New York Mets game in 2008. Shea had the best attendance in the National League that year, garnering over 53,000 fans per game on average.

The only big difference between the National League and the American League (AL) is that the AL uses the "Designated Hitter" (or DH). The Designated Hitter is a player who does not play in the field, but is used to bat for the worst hitter in his team's "lineup", usually the pitcher. The NL does not use the Designated Hitter, and all players in the side must bat and field for themselves.

All content from Kiddle encyclopedia articles (including the article images and facts) can be freely used under Attribution-ShareAlike license, unless stated otherwise. Cite this article:
National League Facts for Kids. Kiddle Encyclopedia.