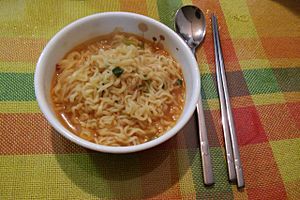 Instant noodles are sold in a precooked and dried noodle block, with flavoring powder and/or seasoning oil. The flavoring is usually in a separate packet, although in the case of cup noodles the flavoring is often loose in the cup. Some instant noodle products are seal packed; these can be reheated or eaten straight from the packet/container. Dried noodle blocks are cooked or soaked in boiling water before eating.

Instant noodles were invented by Momofuku Ando (born Go Pek-Hok) of Nissin Foods in Japan. They were launched in 1958 under the brand name Chikin Ramen. In 1971, Nissin introduced Cup Noodles, the first cup noodle product. Instant noodles are marketed worldwide under many brand names. 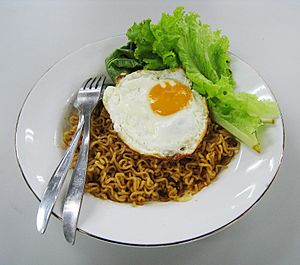 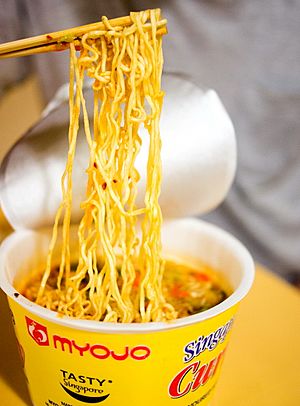 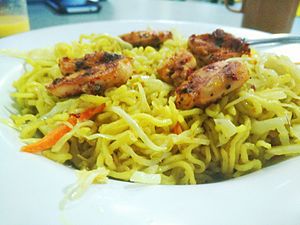 Instant noodles were invented by Taiwanese-Japanese inventor Momofuku Ando in Japan. It was first marketed on 25 August 1958 by Ando's company, Nissin, under the brand name Chikin Ramen. Ando developed the production method of flash frying noodles after they had been made, creating the "instant" noodle. This dried the noodles and gave them a longer shelf life, even exceeding that of frozen noodles.

Each noodle block was pre-seasoned and sold for 35 yen. Initially, due to its price and novelty, Chikin Ramen was considered a luxury item, as Japanese grocery stores typically sold fresh noodles for one-sixth their price. Despite this, instant noodles eventually gained immense popularity, especially after being promoted by Mitsubishi Corporation.

In 1971, Nissin introduced Nissin Cup Noodles, a cup noodle to which boiling water is added to cook the noodles. A further innovation added dried vegetables to the cup, creating a complete instant soup dish.

According to a Japanese poll in the year 2000, "The Japanese believe that their best invention of the twentieth century was instant noodles." As of 2010[update], approximately 96 billion servings of instant noodles are eaten worldwide every year. China consumes 42 billion packages of instant noodles per year – 44% of world consumption – Indonesia, 14 billion; Japan, 5.3 billion, Vietnam 4.8 billion, USA 4 billion. Per capita, South Koreans consume the greatest amount of instant noodles, 69 per capita per year.

Instant noodles is a dish used in cooking. These noodles were cooked at the factory and packaged as dried noodles, often with a special powder that adds flavor to the noodles. The dish is prepared very quickly (usually 5 minutes or less), simply by putting the noodles together in hot water and then adding the powder. A kind of noodle soup is then ready to eat.

Instant noodles are very popular in Asia, and among many students and poorer people, because they are very cheap to produce and to buy. In the United States, a package of instant noodles sometimes costs only ten cents.

There are many companies who manufacture Instant Noodles, some of them being:

Instant noodles are often criticized as unhealthy or junk food. A single serving of instant noodles is high in carbohydrates and fat, but low in protein, fiber, vitamins and minerals.

All content from Kiddle encyclopedia articles (including the article images and facts) can be freely used under Attribution-ShareAlike license, unless stated otherwise. Cite this article:
Instant noodles Facts for Kids. Kiddle Encyclopedia.