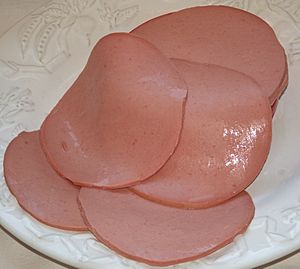 Bologna sausage, also spelled baloney, is a sausage derived from mortadella, a similar-looking, finely ground pork sausage containing cubes of pork fat, originally from the Italian city of Bologna. Typical seasoning for bologna includes black pepper, nutmeg, allspice, celery seed and coriander and, like mortadella, myrtle berries give it its distinctive flavor. Other common names include parizer (Parisian sausage) in the countries deriving from ex Yugoslavia, Hungary and Romania, polony in Zimbabwe, Zambia, South Africa and Western Australia, devon in most states of Australia, and fritz in South Australia.

In North America, a simple and popular recipe is the bologna sandwich.

Aside from pork, "bologna" can be made out of chicken, turkey, beef, venison, a combination of meats, or soy protein.

U.S. government regulations require American bologna to be finely ground, and without visible pieces of fat.

Lebanon bologna is a Pennsylvania Dutch prepared meat. While nominally bologna, it is a dried, smoked sausage similar to salami.

In the United Kingdom and Ireland, "polony" is a finely ground pork-and-beef sausage. The name, likely derived from Bologna, has been in use since the 17th century. The modern product is usually cooked in a red or orange skin and is served as cold slices.

In New Zealand "polony" is a type of cocktail sausage with pink or red artificially coloured skin similar to, but much smaller than, a Saveloy. Miniature polonies in New Zealand are called "Cheerios". They are eaten boiled.

In 2018, a South African factory that produced polony and other processed meats was associated with a listeriosis outbreak that killed approximately 180 people and sickened a further thousand.

Rag bologna is a long stick, or "chub", of high-fat bologna traditionally sold wrapped in a cloth rag. The recipe has a higher content of filler than that of regular bologna. Milk solids, flour, cereal, and spices are added during processing, and the roll of bologna is bathed in lactic acid before being coated in paraffin wax. This type of bologna is native to West Tennessee and the surrounding regions and is not commonly available outside this area. It is generally eaten on white bread with mustard and pickles, but is also a staple of family gatherings, where thick slices are smoked and barbecued along with other meats. In Newfoundland, a type of rag bologna referred to as "wax" bologna is sliced thickly and fried, which is referred to as "Newfie steak".

Ring bologna is much smaller in diameter than standard bologna. It is better suited for slicing and serving on crackers, either as a snack or hors d'oeuvre. It is generally sold as an entire link rather than sliced. The link is arranged as a semicircle or "ring" when prepared for sale (hence the name). Pickled bologna is usually made from ring bologna soaked in vinegar and typical pickling spices. It is usually served in chunks as a cold snack.

Various vegetarian and vegan versions of bologna are available. A typical UK recipe uses soya and wheat protein in the place of lean meat and palm oil instead of fat together with starch, carrageenan, and flavorings. It can be eaten cold or cooked in the same ways as traditional bologna.

All content from Kiddle encyclopedia articles (including the article images and facts) can be freely used under Attribution-ShareAlike license, unless stated otherwise. Cite this article:
Bologna sausage Facts for Kids. Kiddle Encyclopedia.