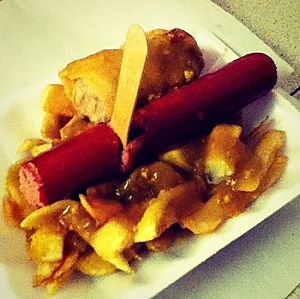 A saveloy served with chips and curry sauce in Nottingham, England

A saveloy is a type of highly seasoned sausage, usually bright red, normally boiled and often available in British fish and chip shops, especially in London, Buckinghamshire, Essex, Newcastle, Stoke-on-Trent and the Midlands. It is occasionally also available fried in batter. Saveloys also enjoyed in a sandwich, “Sav Dip” the bun is dipped in the water which the saveloy is boiled in or in gravy, with a layer of stuffing and pease pudding.

The word is believed to be derived from Middle French cervelas or servelat, originating from Old Italian cervellato ("pigs brains"), ultimately from the Latin cerebrus ("brain"). Its first known use in the English language in this meaning was 1784.

The saveloy is mostly eaten with chips.

The saveloy is available in Australia and New Zealand, where it is consumed at fairs, fêtes, agricultural shows and sporting events, served deep fried in batter known as a battered sav. At the turn of the 20th century, the saveloy was described in an Australian court case as a "highly seasoned dry sausage originally made of brains, but now young pork, salted" but by the mid-century, it was commonly defined by its size as a 19 cm sausage, as opposed to a frankfurt at 26 cm. This distinction may be due to the frankfurt's popularisation (as an ingredient of hot dogs). Despite "frankfurt" sausage makers being the target of violence in World War I, the story that saveloys were once frankfurts, renamed due to anti-German sentiment, is purely apocryphal, as far as Australia is concerned.

Saveloys are popular in New Zealand and to a lesser extent Australia, where they are larger than the English type. In Australia, saveloys are usually a beef-pork blend. In New Zealand, saveloys are usually a lamb-pork-beef blend (which distinguishes them from frankfurters which are a pork-beef blend.) Although they are sold at fish-and-chip shops as in England, they are commonly bought at butchers' shops or supermarkets and cooked by boiling at home. Saveloys are known colloquially in both countries as "savs". They are often the basis of the New Zealand battered-sausage-on-a-stick "hot dog", equivalent to a US corn dog, often sold at fairgrounds and public events. The Australian version is often called a "dagwood dog" or "pluto pup". Another Australian variant, the "battered sav", while not as common as it once was, used wheat flour batter with no corn in the mixture and, like its English counterpart, was sold in fish-and-chip shops and had no stick. In South Australia up to at least the 1960s “sav and roll” was popular football fare especially at country matches. This was simply a saveloy heated in a wood-fired copper (boiler) placed in a split bread roll and liberally covered with tomato sauce.

A cocktail sausage is a smaller version of the saveloy, about a quarter of the size - in Australia sometimes called a "baby sav", a "footy frank" or a "little boy", and in New Zealand and Queensland called a "cheerio." These are a popular children's party food in New Zealand and Australia, often served hot alongside tomato sauce.

In The Pickwick Papers (Chapter LV) Solomon Pell, an attorney at the Insolvent Court, is described as "regaling himself, business being rather slack, with a cold collation of an Abernethy biscuit and a saveloy". Saveloy is also eaten by Fagin in Oliver Twist., and it also appears in the 1968 musical film based on the novel, directed by Carol Reed, when it is mentioned in the number "Food, Glorious food."

A type of hot dog which is almost indistinguishable from the saveloy is popular in the state of Maine, where it is commonly known as a "red hot" or "red snapper". It is usually grilled or boiled as is common in the UK.

All content from Kiddle encyclopedia articles (including the article images and facts) can be freely used under Attribution-ShareAlike license, unless stated otherwise. Cite this article:
Saveloy Facts for Kids. Kiddle Encyclopedia.