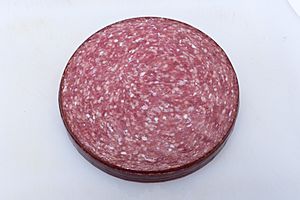 Lebanon bologna is a type of cured, smoked and fermented semidry sausage. Made of beef, it is similar in appearance and texture to salami, though somewhat darker in color. Typically served as a cold cut or appetizer, Lebanon bologna has a distinct tangy flavor, more so than other generally similar fermented meat products such as summer sausage. Hardwood smoking imparts a strong smokiness to the traditionally prepared versions of the product; increasingly, liquid smoke is used as a substitute for this costly time- and labor-intensive process.

Lebanon bologna was developed by the Pennsylvania Dutch of Lebanon County, Pennsylvania prior to the 1780s and was a common item by the early 1800s, reflecting the slow-cured and smoked sausage traditions of Western Europe. Still produced primarily in that area, it is found in markets throughout the United States and typically served as a cold cut and as an appetizer. In addition to the original, a sweet version is made.

Typically, curing salts are added to the ground and spiced meat to control microbial growth during processing. The blended and stuffed beef sausage is then aged for 10 days prior to smoking to enrich lactic acid bacteria and allow for the reduction of nitrate to nitrite. Fermentation occurs during a slow cold smoke (kept at a temperature below 120 °F (49 °C)) that can last for up to four days. A one pH unit (or more) decline is observed during this step, as well as the development of nitrosohemochrome, the pigment responsible for the red color of cured meats.

All content from Kiddle encyclopedia articles (including the article images and facts) can be freely used under Attribution-ShareAlike license, unless stated otherwise. Cite this article:
Lebanon bologna Facts for Kids. Kiddle Encyclopedia.