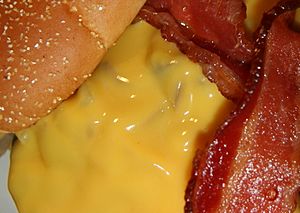 A cheeseburger with bacon and melted Velveeta in place of cheese

Velveeta is a brand name for a processed cheese product that tastes like an American cheese, with a softer and smoother texture than non-processed cheese. When melted, Velveeta keeps a fully integrated and evenly clump-free liquid texture. It was invented in 1918 by Emil Frey of the Monroe Cheese Company in Monroe, New York. In 1923, The Velveeta Cheese Company was incorporated as a separate company, and sold to Kraft Foods in 1927.

The product was advertised as a nutritious health food. In the 1930s, Velveeta became the first cheese product to gain the American Medical Association's seal of approval. It was reformulated in 1953 as a "cheese spread", but as of 2002 Velveeta must be labeled in the United States as a "pasteurized prepared cheese product."

The name Velveeta was intended to connote a "velvety smooth" edible product. Smoothness and melting ability are promoted as properties that result from reincorporating the whey with the curd. The brand has been expanded into a line of products including cheesy bites, macaroni and cheese, and cheesy skillets.

Classification as a cheese product

In 2002, the FDA issued a warning letter to Kraft that Velveeta was being sold with packaging that described it as a "pasteurized process cheese spread", which the FDA claimed was false because the product listed milk protein concentrate (MPC) in its ingredients. Velveeta is now sold in the US as a "pasteurized prepared cheese product", a term for which the FDA does not maintain a standard of identity, and which therefore may contain milk protein concentrate.

Kraft Foods has marketed Velveeta as an ingredient in chile con queso and grilled cheese sandwiches. It is currently sold in the United States, Canada, Panama, Hong Kong, the Philippines, and South Korea. In the 1930s and 1940s, it was sold in the United Kingdom and Germany as "Velveta".

In the 1980s, Velveeta used the advertising jingle, "Colby, Swiss and Cheddar, blended all together" in its US television commercials to explain its taste and texture because real cheese was used in the product at that time.

Musical artist Chief Keef has referenced Velveeta in his song titled "Faneto" with the lyrics, "Cheese in my pockets, Velveeta"

All content from Kiddle encyclopedia articles (including the article images and facts) can be freely used under Attribution-ShareAlike license, unless stated otherwise. Cite this article:
Velveeta Facts for Kids. Kiddle Encyclopedia.