Kids Encyclopedia Facts
Not to be confused with Monroe County, New York. 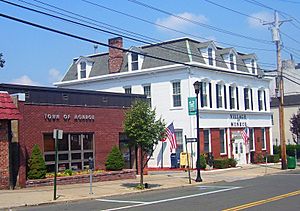 Monroe town hall, on left next to village hall

Location in Orange County and the state of New York.

Monroe is a town in Orange County, New York, United States. The population was 39,912 at the 2010 census. The town is named after President James Monroe.

The First Settlers to this land were American Indians from the Lenni-Lenape Indian nation. The Lenni-Lenape nation consisted of three tribes, "The Unulactus, the Turkey tribe, Minsis, the Wolf-Tribe, and the Unamis, the Turtle tribe". As white settlers started to move north the Lenni-Lenape nation was forced to move west, out of New York and New Jersey and into Pennsylvania, and later on into central North America, under the Treaty of Easton. The Treaty of Easton was a colonial agreement signed on October 1758. The British colonial government of the Province of Pennsylvania and the Native American tribes in the Ohio Country signed this document stating they would be allies in the French and Indian War.

In the early 1700s the lower Hudson Valley region was being mapped out to be divided up under the crown. On March 25, 1707, the "Chessecocks Patent was granted by Queen Anne". The patent confirmed deeds that had been previously acquired by purchase directly from the Lenni-Lenape Indian Nation. The Patent was given to seven people, six men and one woman". "Cheesecocks as a precinct included all of present day Monroe, Woodbury, Tuxedo, and Stony Point (Monroe New York). "Many of the patentees never saw the land they bought or were given". Many of the new settlers to come with the Cheesecocks Patent were Dutch, and English. Both groups of settlers came from Long Island to this unknown land for its "rich natural resources".

The original name for the area on the Ramapo surveyed by General Washington's Geographer and Surveyor, Robert Erskine, was " Smith's Mill", described by Erskine as being "on a sudden bend of the Ramapo." This site still contains the ruins of the grist mill built in 1741 by David Smith, the first settler.(Map of Orange and Rockland Counties Area laid down by R. Erskine 1778–1779). The Clove Road, which led from Haverstraw, home of Sir. William Smith, up through Tuxedo and the rocky defile known by the Dutch word "kloof" for Clove was vital to the American cause during the Revolutionary War. It was unknown to the British patrolling the Hudson, and gave Washington his escape route from New York to his New Windsor headquarters. The area was called Southfields prior to April 6, 1808,when it took its present name of Monroe. (Belcher, pp. 68–9)

July 15, [1777]. To Sovereign (Suffern's or Suffren's) Tavern, near the entrance to Smith's Clove . On Sunday, July 20, 1777, Washington has moved on northward into the Ramapo Valley and to the place then known as Galloway's, which is now the village of Southfields. (Belcher, p. 81)

David Smith a prosperous miller of Smithtown, Long Island bought land from one of the original patentees, Philip Livingston. Smith "purchased lot 43, consisting of 276 acres, he built the first home" . Smith built a dam and a grist mill, out of the Ramapo River, which created the Mill Pond today, as well as homes for himself and his four sons.

In 1889, a final division of the town resulted in a loss of territory to the Towns of Woodbury and Tuxedo. In 1894, the community of Monroe set itself apart from the town by incorporating as a village.

The town is the birthplace of Velveeta and Liederkranz cheese. Each year a cheese festival is held to honor the former and the noble history (and unfortunate death) of the latter.[1] it also was the original home of the Orange and Rockland Electric Company, founded by Roscoe W. Smith, a descendent of David Smith.

On the night of March 17, 1895 the Village of Monroe had one of the most disastrous fires in its history, in which the center of the Village was nearly wiped out. "The total losses of real estate were three large business places, three barns, a storehouse, several sheds and smaller buildings valued altogether at $25,000. Personal property, goods-in stock and furniture destroyed were valued at $15,000". It was said that people from all over took the Erie Railroad to come see the remains of the “Big Fire”. A short time after the fire the Village decided to install a water works system which would be owned by the Village. “On July 24, 1895 the Mombasha Fire Company was organized. The Hook and Ladder Company was organized on October 4, 1895. In 1898 the two Companies consolidated as the Mombasha Fire Company”.

In the early 1900s the Monroe Race Track was established to "increase the towns popularity as both local residents and visitors flocked to the track to watch the horse races and place bets on the trotters". The first race was held on August 8, 1908 there was 22,000 people estimated at the race. The track became a part of the Orange County Harness Racing Circuit which included Endicott, Middletown, Goshen, and Monroe. “The first grandstand was located on the long side of the track, while the second grandstand wasn’t completed until 1910. It was seventy-five feet long and could hold one thousand people”. The Track only lasted nineteen years. “On August 13, 1913 the race track record was set with a time of 2:04¼ minutes for the mile pace on a half mile track. At this time this was also a world record for a pacer”. In 1927 Monroe was dropped by the circuit and was replaced by Elmira, New York which had just completed construction of a new 5,000 seat grandstand. The last purse offered at Monroe Track in 1927 was for $31,000. In 1964 the grandstands of the track were torn down. 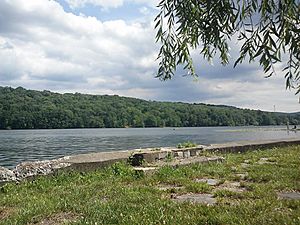 Communities within the Town of Monroe.

There were 8,228 households out of which 53.6% had children under the age of 18 living with them, 74.3% were married couples living together, 6.3% had a female householder with no husband present, and 16.4% were non-families. 13.2% of all households were made up of individuals and 5.2% had someone living alone who was 65 years of age or older. The average household size was 3.72 and the average family size was 4.14.

All content from Kiddle encyclopedia articles (including the article images and facts) can be freely used under Attribution-ShareAlike license, unless stated otherwise. Cite this article:
Monroe, New York Facts for Kids. Kiddle Encyclopedia.