Kids Encyclopedia Facts
Not to be confused with Monroe, New York.

Monroe County is a county in the Finger Lakes region of New York State. The county is along Lake Ontario's southern shore. As of 2020, Monroe County's population was 759,443, an increase since the 2010 census. Its county seat and largest city is the city of Rochester. The county is named after James Monroe, the fifth president of the United States. Monroe County is part of the Rochester, NY Metropolitan Statistical Area. The current County Executive is Adam Bello.

When counties were established in the Province of New York in 1683, the present Monroe County was part of Albany County. This was an enormous county, including the northern part of New York State as well as all of the present State of Vermont and, in theory, extending westward to the Pacific Ocean. This county was reduced in size on July 3, 1766 by the creation of Cumberland County, and further on March 16, 1770 by the creation of Gloucester County, both containing territory now in Vermont.

In the years prior to 1776, most of the Loyalists in Tryon County fled to Canada. In 1784, following the peace treaty that ended the American Revolutionary War, the name of Tryon County was changed to Montgomery County in order to honor the general, Richard Montgomery, who had captured several places in Canada and died attempting to capture the city of Quebec, replacing the name of the hated British governor.

Genesee County was created by a splitting of Ontario County in 1802. This was much larger than the present Genesee County, however. It contained the present Allegany, Cattaraugus, Chautauqua, Erie, Niagara, Orleans, Wyoming, and portions of Livingston and Monroe counties.

Finally, Monroe County was formed from parts of Genesee and Ontario counties in 1821.

Monroe County is in Western New York State's northern tier, northeast of Buffalo and northwest of Syracuse. The northern county line is also the state line and the border of the United States, marked by Lake Ontario. Monroe County is north of the Finger Lakes. 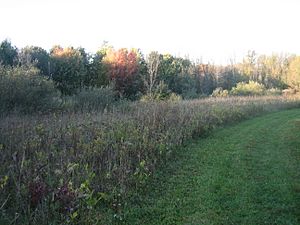 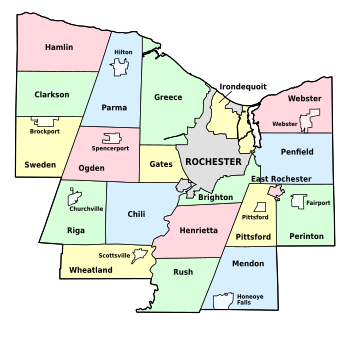 The town, village, and city borders

Villages in New York State are incorporated municipalities located within Towns. The town in which each village is located is noted in parenthesis.

In New York State the term "Hamlet", although not defined in law, is used to describe an unincorporated community and geographic location within a town. The town in which each Hamlet is located is in parenthesis.

All content from Kiddle encyclopedia articles (including the article images and facts) can be freely used under Attribution-ShareAlike license, unless stated otherwise. Cite this article:
Monroe County, New York Facts for Kids. Kiddle Encyclopedia.