Erie County is a county in the U.S. state of New York. As of the 2010 census, the population was 919,040. The county seat is Buffalo. The county's name comes from Lake Erie, which in turn comes from the Erie tribe of Native Americans who lived south and east of the lake before 1654.

Erie County is part of the Buffalo–Niagara Falls metropolitan area. The county's southern part is known as the Southtowns. 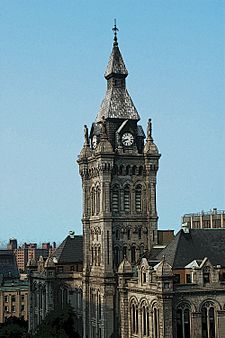 The first towns formed in present-day Erie County were the Town of Clarence and the Town of Willink. Clarence comprised the northern portion of Erie county, and Willink the southern part. Clarence is still a town, but Willink was quickly subdivided into other towns. When Erie County was established in 1821, it consisted of the towns of Amherst, Aurora, Boston, Clarence, Collins, Concord, Eden, Evans, Hamburg, Holland, Sardinia, and Wales.

The county has a number of properties on the National Register of Historic Places listings in Erie County, New York.

In 1861, the hamlet of Town Line in the Town of Lancaster, voted 85 to 40 to secede from the Union and join the Confederate States of America; it sent five soldiers for the Confederate Army, and did not officially rejoin the Union until January 1946. The Town Line Fire Department supports the slogan "Last of the Rebels" due to their Confederate ties.

Erie County is in the western portion of upstate New York, bordering on the lake of the same name. It is the most populous county in upstate New York outside of the New York City metropolitan area. The county also lies on the international border between the United States and Canada, bordering the Province of Ontario.

The county's northern half, including Buffalo and its suburbs, is relatively flat and rises gently up from the lake. The southern half, known as the Southtowns, is much hillier and is the northwesternmost foothills of the Appalachian Mountains.

The highest elevation in the county is a hill in the Town of Sardinia that tops out at around 1,940 feet (591 m) above sea level. The lowest ground is about 560 feet (171 m), on Grand Island at the Niagara River.

The Onondaga Escarpment runs through the northern part of Erie County. 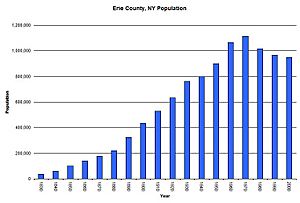 The Erie County Fair held every August in the Town of Hamburg, is one of the largest county fairs in the country.

Plans to merge Erie County with the City of Buffalo have been suggested, which proponents say would eliminate much of the extensive bureaucracy and political and municipal subdivisions among the various towns, cities, and villages in the county. The result would be a consolidated city-county controlled by a single government, effectively making Buffalo's borders and population contiguous with Erie County's. These plans have proven very controversial; opposition has come from residents of the rural villages on the borders of Erie County, who feel the plan would not benefit them, and the suburbs, which want to avoid the financial troubles of Buffalo and Erie County while simultaneously benefiting from the amenities of close proximity to a large population base.

The Erie County Department of Parks, Recreation and Forestry was established in 1925 with four parks spanning 2,280 acres (9.2 km2). As of 2003, the county managed 38 properties, totaling approximately 11,000 acres (45 km2) of land. Management objectives include providing and maintaining recreational space and the conservation of the county's natural and historic resources.

Erie County's heritage parks include the five original county parks that were established during the 1920s and 1930s. These parks are examples of multiple-use sites with significant scenic, natural and historic features. Each park has unique man-made structures of historical character, many constructed as part of the Works Progress Administration movement in the 1930s. 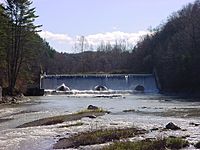 These largely-undeveloped parks are managed primarily for conservation of the natural environment and passive nature-based outdoor recreation activities. These lands are intended to generally remain in a natural state.

Forest management areas are managed by the Erie County Bureau of Forestry, which was established in 1927. These areas include several thousand acres of mostly-coniferous plantation style forest, much of which was planted on abandoned farmland by the Civilian Conservation Corps in the 1930s. These areas are located mostly in the rural southern portion of the county.

These lands have limited recreation potential, mostly in the form of trails. Management of these lands is focused on natural resource conservation, in addition to potential commercial resource extraction of timber products or maple syrup. 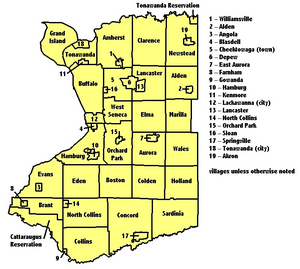 All content from Kiddle encyclopedia articles (including the article images and facts) can be freely used under Attribution-ShareAlike license, unless stated otherwise. Cite this article:
Erie County, New York Facts for Kids. Kiddle Encyclopedia.