Akron is a village in Erie County, New York, United States. The population was 2,868 at the 2010 census. The name derives from the Greek word ἄκρον signifying a summit or high point. It is part of the Buffalo–Niagara Falls Metropolitan Statistical Area. Akron is located in the town of Newstead on the west and north slopes of a hill. NY 93 passes through the village. 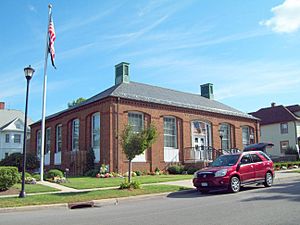 The post office in Akron is listed on the National Register of Historic Places.

The village was developed after land was purchased from local Native Americans. The site of the village was first settled around 1829, centered on Akron Falls, which provided water power. Akron became an incorporated village in 1849. The village absorbed the community of Fallkirk in its growth. In 1880, the population of Akron was about 1,050. It was then an important cement-producing center, due to local deposits of gypsum. Besides production of cement, the village also produced cigars.

According to the United States Census Bureau, the village has a total area of 2.0 square miles (5.2 km2), all land.

Akron is adjacent to the Tonawanda Reservation of the Seneca, but most of the reservation is in Genesee County. A small general aviation airport, Akron Airport, is on high ground on the eastern side of the village. Much of Akron Falls County Park is within the village. The falls are a feature of Murder Creek, which passes through the park and the village flowing in a northwesterly direction.

There were 1,313 households out of which 28.8% had children under the age of 18 living with them, 48.8% were married couples living together, 11.1% had a female householder with no husband present, and 36.1% were non-families. 31.3% of all households were made up of individuals and 18.1% had someone living alone who was 65 years of age or older. The average household size was 2.34 and the average family size was 2.94. 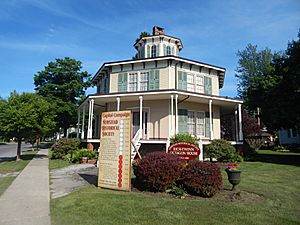 Rich-Twinn House in June 2015, during restoration

All content from Kiddle encyclopedia articles (including the article images and facts) can be freely used under Attribution-ShareAlike license, unless stated otherwise. Cite this article:
Akron, New York Facts for Kids. Kiddle Encyclopedia.