The Tonawanda Indian Reservation' (Seneca: Ta:nöwöde) is an Indian reservation of the Tonawanda Seneca Nation located in western New York, United States. The band is a federally recognized tribe and, in the 2010 census, had 693 people living on the reservation. The reservation lies mostly in Genesee County, extending into Erie and Niagara counties. It is bordered by the Towns of Alabama, Pembroke, Newstead, and Royalton.

The Tonawanda Reservation is also known as the Tonawanda Creek Reservation. Currently, it has more than a half dozen businesses located on Bloomingdale Road within the reservation. Several sell untaxed, low-price cigarettes and gasoline. Other businesses sell Seneca craft goods, groceries, and prepared food.

After various cultures of indigenous peoples succeeded each other in the Great Lakes area, in late prehistoric times, the five nations of the Iroquois coalesced. Before the mid-14th century, they had formed the Iroquois Confederacy. The Seneca were one of the Five Nations of the Haudenosaunee. The current location of the Tonawanda Reservation is believed to be close to the likely poorly-defined border between the historic Seneca homeland and its rivals, the Neutral Nation that occupied the Niagara Region at the time of French missionary Joseph de La Roche Daillon's arrival in the area in 1627. During the Beaver Wars of the 17th century, the Seneca invaded what is now Western New York, wiping out the Neutrals and other tribes in the region.

The Iroquois pledged allegiance to the British Crown in the Nanfan Treaty. During the French and Indian War, the Iroquois and British defeated New France; the Iroquois and other native territory was placed in a massive Indian Reserve. During the American Revolutionary War, most of the Iroquois sided with the British Crown, as they hoped to end colonial encroachment; to this effect, the Iroquois led several massacres on colonial settlements, which provoked the Continental Army to respond with the scorched-earth Sullivan Expedition, wiping out much of the Senecas' already destitute homelands. After the Crown's defeat, some of the Seneca, along with other Iroquois, migrated with Joseph Brant to the Grand River reservation in the still British-controlled territory of upper Canada (now known as the province of Ontario).

Those majority of the Seneca People remained in what is now western New York, subsequently ceding lands through the Canandaigua Treaty of 1794 and the Treaty of Big Tree in 1797 which led to the reservations in western New York.

The Seneca of this reservation worked with self-taught anthropologist Lewis H. Morgan in mid century to teach him about the Iroquois kinship and social structures. He published the results of his work in 1851 as The League of the Ho-de-no-sau-nee or Iroquois. His insights about the significance and details of kinship structure in Native American societies influenced much following anthropological and ethnological research. Much of the information was provided by his colleague and friend Ely S. Parker, a Seneca born on the reservation in 1828. Morgan dedicated his book to Parker and credited him with their joint research.

Over the years, the size of the reservation has been reduced by sales of land to surrounding communities. The reservation is also noticeably more racially integrated than most Seneca Nation of Indians territories (excluding Salamanca, which operates on a lease system); whereas the Seneca Nation has actively resisted non-native settlement of its territories, the Tonawanda Band has been somewhat more tolerant of allowing non-natives to live on its territory.

The Tonawanda Creek flows through the entire reservation to the Niagara River, separating the part in Niagara County from the parts in Erie and Genesee counties. The river constitutes a barrier. Together with the absence of paved roads, these factors limit the population in this part of the reservation.

The northern boundary of the reservation's Niagara County portion is part of the Tonawanda Wildlife Management Area.

The United States Census Bureau compiles separate demographic data for each county's portion of the reservation. 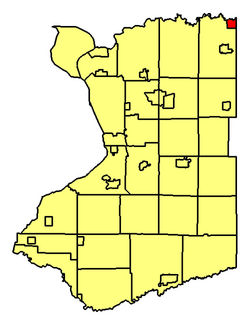 There were 9 households, out of which three consisted of a married couple living together and two were made of a single individual. One household had someone living alone who was 65 years of age or older. The average household size was 3.78 and the average family size was 4.43.

In the Indian reservation the population was spread out, with eighteen person under the age of 20, four people from 20 to 24, nine people from 25 to 44, one person from 45 to 64, and three persons 65 years of age or older. The median age was 19.5 years. Nineteen of the reservation's residents were female and fifteen were male.

There were 86 households, out of which 32.3% had children under the age of 18 living with them, 44.6% were married couples living together, 13.4% had a female householder with no husband present, and 34.9% were non-families. 27.4% of all households were made up of individuals, and 10.8% had someone living alone who was 65 years of age or older. The average household size was 2.87 and the average family size was 3.49.

As of the census of 2010, there are no people living in the location.

Residents living on the Tonawanda Reservation are included in the Akron Central School District.

All content from Kiddle encyclopedia articles (including the article images and facts) can be freely used under Attribution-ShareAlike license, unless stated otherwise. Cite this article:
Tonawanda Reservation Facts for Kids. Kiddle Encyclopedia.