Beaver Island State Park is a New York state park located on Grand Island in northwestern Erie County, New York in the United States. It is situated at the southern end of the island on the bank of the Niagara River and served by the Beaver Island Parkway, a 2.72-mile (4.38 km) highway linking the park to Interstate 190 (I-190). 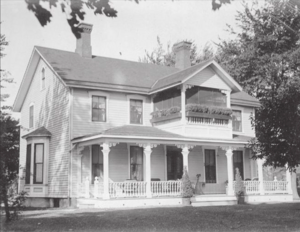 "River Lea," which was built by Lewis F. Allen for his son William

The present-day Beaver Island State Park opened in 1935 and consists of several historic Grand Island estates of Buffalo's elite that were donated to New York State for all Western New Yorkers to enjoy. These grand estates included:

In 2015, it was announced that a new $2 million pro shop with a bar and restaurant and a large, outdoor seating area was coming to Beaver Island Golf Course. It will replace the one destroyed by fire in 2012.

The park offers a beach, picnic tables with pavilions, recreation programs, a nature trail, birdwatching (including swans, and herons), seasonal waterfowl hunting, fishing and ice-fishing, sledding, cross-country skiing, cross country running, snowshoeing, sledding and snowmobiling, a boat launch with marina and dockage, and a food concession. The park's nature center is open from noon to 4 p.m. on Friday, Saturday, and Sunday. Attendance at Beaver Island rose to about 279,000 in 2014, up from 269,000 in 2013.

The course was designed by William Harries and Russ Tryon and opened in 1963. 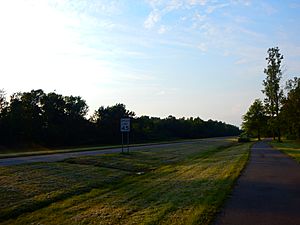 The Beaver Island Parkway, also known as South Parkway, is a 2.72-mile (4.38 km) parkway connecting its namesake park to I-190 (the Niagara Section of the New York State Thruway) and New York State Route 324 (NY 324) near the South Grand Island Bridge. This roadway is a four-lane divided expressway, and there are no driveways leading to and from the roadway. However, there are at-grade intersections along the route. The parkway is within the jurisdiction of the New York State Office of Parks, Recreation and Historic Preservation but is maintained and inventoried by the New York State Department of Transportation (NYSDOT) as NY 957B, an unsigned reference route.

All junctions on the route, excluding those with West River Parkway and I-190, are at-grade intersections. At the northern end of the parkway near East River Road, an additional ramp connects to I-190 northbound via NY 324 westbound and Staley Road.

Beaver Island Parkway begins at a traffic circle with West River Parkway and Park Road at the entrance to Beaver Island State Park. It heads north as a four-lane divided highway, initially passing through wooded areas on the northern edge of the park. As it leaves the vicinity of the park, the woods around the highway gradually give way to residential neighborhoods. The parkway intersects a few local roads as it turns northeast and comes to its terminus at an interchange with I-190 and NY 324.

All content from Kiddle encyclopedia articles (including the article images and facts) can be freely used under Attribution-ShareAlike license, unless stated otherwise. Cite this article:
Beaver Island State Park Facts for Kids. Kiddle Encyclopedia.