Kids Encyclopedia Facts
Not to be confused with Nagara River.

The Niagara River ( NY-ag-ƏR-ə; French: rivière Niagara) is a river that flows north from Lake Erie to Lake Ontario. It forms part of the border between the province of Ontario in Canada (on the west) and the state of New York in the United States (on the east). There are differing theories as to the origin of the river's name. According to Iroquoian scholar Bruce Trigger, Niagara is derived from the name given to a branch of the locally residing native Neutral Confederacy, who are described as being called the Niagagarega people on several late-17th-century French maps of the area. According to George R. Stewart, it comes from the name of an Iroquois town called Ongniaahra, meaning "point of land cut in two".

The river, which is occasionally described as a strait, is about 58 kilometres (36 mi) long and includes Niagara Falls in its course. The falls have moved approximately 11 kilometres (6.8 mi) upstream from the Niagara Escarpment in the last 12,000 years, resulting in a gorge below the falls. Today, the diversion of the river for electrical generation has significantly reduced the rate of erosion. The total drop in elevation along the river is 99 metres (325 ft). The Niagara Gorge extends downstream from the Falls and includes the Niagara Whirlpool and another section of rapids.

Power plants on the river include the Sir Adam Beck Hydroelectric Power Stations (built in 1922 and 1954) on the Canadian side, and the Robert Moses Niagara Power Plant (built in 1961) on the American side. Together, they generate 4.4 gigawatts of electricity. The International Control Works, built in 1954, regulates the river flow. Ships on the Great Lakes use the Welland Canal, part of the Saint Lawrence Seaway, on the Canadian side of the river, to bypass Niagara Falls.

The American Falls with Goat Island to its right 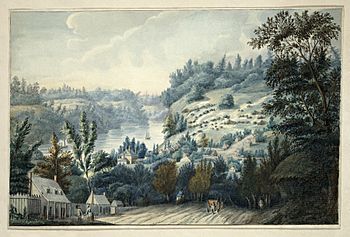 Queenston, Ontario, then known as Queenstown, Upper Canada, in a c. 1805 watercolour by army surgeon Edward Walsh. The Niagara River is clearly visible.

The Niagara River and Falls have been known outside of North America since the late 17th century, when Father Louis Hennepin, a French explorer, first witnessed them. He wrote about his travels in A New Discovery of a Vast Country in America (1698).

The Niagara River was the site of the earliest recorded railway in America. It was an inclined wooden tramway built by John Montresor (1736–1799), a British military engineer, in 1764. Called "The Cradles" and "The Old Lewiston Incline," it featured loaded carts pulled up wooden rails by rope. It facilitated the movement of goods over the Niagara Escarpment in present-day Lewiston, New York.

The river was an important route to liberation before the American Civil War, when many African-Americans escaping slavery on the Underground Railroad crossed it to find freedom in Canada. The Freedom Crossing Monument stands on the bank of the river in Lewiston to commemorate the courage of the escaping slaves and the local volunteers who helped them secretly cross the river.

In the 1880s, the Niagara River became the first waterway in North America harnessed for large-scale generation of hydroelectricity.

On the Canadian side of the river the provincial agency Niagara Parks Commission maintains all of the shoreline property, including Fort Erie, except the sites of Fort George (a National Historic Site maintained federally by Parks Canada), as a public greenspace and environmental heritage.

On the American side, the New York State Office of Parks, Recreation and Historic Preservation maintains several state parks adjacent to Niagara Falls and the Niagara River.

Today, the river is the namesake of Niagara Herald Extraordinary at the Canadian Heraldic Authority. 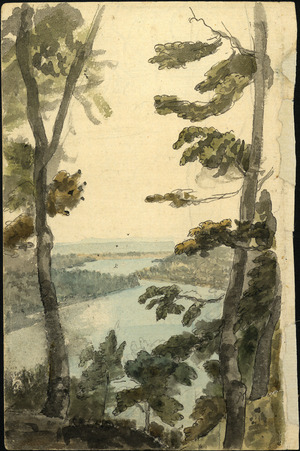 A watercolour painting by Elizabeth Simcoe created [ca. 1793] depicting the Niagara River from Queenston Heights from the Simcoe Family fonds held at the Archives of Ontario. 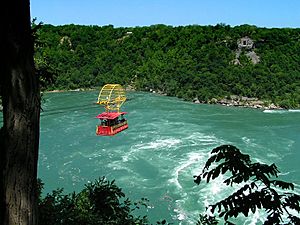 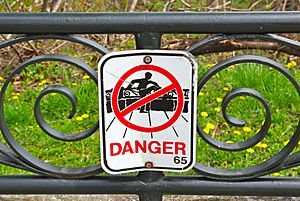 Cities and towns along the Niagara River include:

The Niagara River is listed as a Great Lakes Areas of Concern in The Great Lakes Water Quality Agreement between the United States and Canada.

Main page: List of crossings of the Niagara River

The Niagara River has a long history of both road and rail bridges spanning the river, both upstream and downstream of the Falls. This history includes numerous bridges that have fallen victim to the harsh conditions of the Niagara Gorge, such as landslides and icepacks. 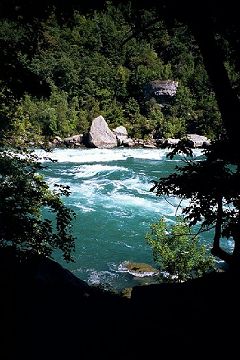 The following parks are located along the Niagara River:

A Niagara River Greenway Plan is in progress in the United States.

Several islands are located on the upper river upriver from the falls:

United States Coast Guard Fort Niagara Station was once a United States Army post. There are no Canadian Coast Guard posts along the river. Fort Mississauga, Fort George and Fort Erie are former British and Canadian military forts (last used 1953, 1965 and 1923 respectively) and are now parks.

Navy Island Royal Naval Shipyard was used by French in 18th Century as a naval base and by Royal Navy from 1763 as a small shipyard and abandoned around 1818 after the ratification of the Rush–Bagot Treaty in 1817.

On the Canadian side the Niagara Parkway travels along the River from Lake Ontario to Lake Erie.

NY 18F lines the river on the state side from Fort Niagara to Lewiston.

Niagara Scenic Parkway on the state side only travels along the River from the Falls to Lewiston. The remaining river sections (with some interruptions) are covered by the

All content from Kiddle encyclopedia articles (including the article images and facts) can be freely used under Attribution-ShareAlike license, unless stated otherwise. Cite this article:
Niagara River Facts for Kids. Kiddle Encyclopedia.