The stations divert water from the Niagara and Welland rivers above Niagara Falls which is then released into the lower portion of the Niagara River, and together produce up to 1,997 MW (2,678,000 hp). 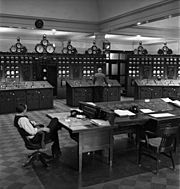 Adam Beck I contains 10 generators and first produced power in 1922. It was originally called the Queenston-Chippawa Hydroelectric Plant and was renamed after Adam Beck in 1950 on the twenty-fifth anniversary of his death. The water is diverted through the Chippawa-Queenston Power Canal from the Welland River.

As the first large-scale hydroelectric generation project in the world, Adam Beck I was designated a National Historic Site of Canada in 1990. 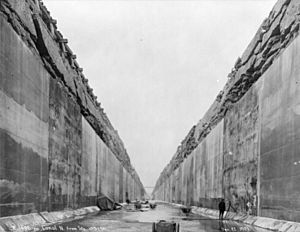 The Chippawa-Queenston Power Canal in 1921; it was the first of three sources to provide water to the Generating Stations

Adam Beck II contains 16 generators and first produced power in 1954. The water was first diverted from the Niagara River by two five-mile (8 km) tunnels under the city of Niagara Falls, Ontario, that start above the falls. A reservoir was created that permits the holding of water, diverted during the night, for use during the day.

Between 2006 and 2013, Adam Beck II underwent major civil engineering projects with the addition of a major underground water supply tunnel built by the Niagara Tunnel Project in order to improve its generation output. Water delivered by the major new tunnel complemented other upgrades to the Sir Adam Beck generating complex, resulting in a significant increase to the efficient use of the Niagara River's hydro power.

The major 1965 Northeast Blackout of Ontario and several U.S. states occurred on 9 November, after maintenance personnel incorrectly set a protective relay on one of the transmission lines from the Sir Adam Beck Station No. II. The faulty relay later tripped open causing a major blackout created by a series of cascading failures which affected over 30 million people for up to 12 hours.

The open cut Chippawa-Queenston Power Canal diverts water from the Welland River to the stations. Upstream of the International Control Dam are three tunnel intakes which run under Niagara Falls, Ontario and surface 2 km (1.2 mi) upstream of the Sir Adam Beck Generating Stations. All three tunnel intakes are upstream of the Control Dam, however one of the three tunnels is unseen, under the water, located directly in front of the Control Dam, Control Tower. The open cut canal and the tunnel canal cross at the "Cross Over" where there is a third channel feeding the 174 MW pump generating station 43°08′40″N 79°03′36″W﻿ / ﻿43.14444°N 79.06000°W﻿ / 43.14444; -79.06000﻿ (Sir Adam Beck Pump Generating Station) which pumps water up into the man-made reservoir at night and generates electricity during the day, feeding the water back to the Sir Adam Beck Generating Complex. 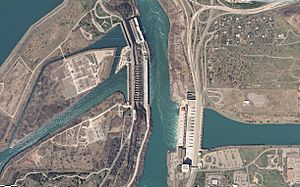 The Adam Beck dams are at the left, and the Robert Moses Station is on the right of the image

All content from Kiddle encyclopedia articles (including the article images and facts) can be freely used under Attribution-ShareAlike license, unless stated otherwise. Cite this article:
Sir Adam Beck Hydroelectric Generating Stations Facts for Kids. Kiddle Encyclopedia.