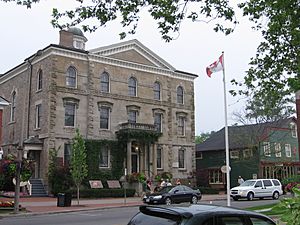 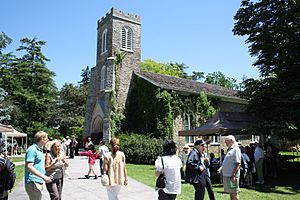 Niagara-on-the-Lake is important in the history of Canada: it served as the first capital of the province of Upper Canada, the predecessor of Ontario, and was called Newark from 1792 to 1797. During the War of 1812, the town, the two former villages of St. David's and Queenston, and Fort George were the sites of numerous battles following the American invasion of Upper Canada, and the town was razed. Niagara-on-the-Lake is home to the oldest Catholic church and the second-oldest Anglican church in Ontario and the oldest surviving golf course in North America.

Today, Niagara-on-the-Lake draws tourists with its quaint colonial-style buildings, the Shaw Festival, Fort George, wineries, an outlet mall on the highway, and its proximity to Niagara Falls. The Niagara Region has the second-highest percentage of seniors in Ontario.

The settlement, known from about 1781 as Butlersburg, in honour of Colonel John Butler, the commander of Butler's Rangers, was renamed West Niagara to distinguish it from Fort Niagara. It was a British military base and haven for pro-British loyalists fleeing the United States during the volatile aftermath of the American Revolution. Renamed Newark by Lieutenant-Governor John Graves Simcoe in 1792, he made it the first capital of Upper Canada (now the province of Ontario), The first provincial parliament was convened at the Navy Hall on September 17, 1792. Due to Newark's close proximity to the Canada–US border, Simcoe moved the capital in 1797 to York and Newark was renamed 'Niagara' in 1798.

Niagara played a central role in the War of 1812. Niagara was taken in the Battle of Fort George by American forces after a two-day bombardment by cannons from Fort Niagara and the American Fleet, followed by a fierce battle. Later in the war, the town was razed and burnt to the ground by American soldiers as they withdrew to Fort Niagara. Undaunted by this setback, often referred to as the "burning of Newark," the citizens rebuilt the town after the war, with the residential quarter around Queen Street and toward King Street, where the new Court House was rebuilt using material out of range of Fort Niagara's cannons.

"It has been a place of considerable trade. On the east side of the town is a large military reserve. About half a mile up the river are the ruins of Fort George, where the remains of General Brock were originally interred; they were removed. A new town-hall and court-house are intended to be erected by the town. There is a fire brigade with two engines and a hook and ladder company. Churches and chapels total five. Two newspapers are published weekly .... Steamboats run daily, as long as the weather will allow of it, from Toronto .... The Niagara Harbour and Dock Company were incorporated in the year 1830 .... the vessels turned out by the Company [include] the steamboat "London," which commenced running in the spring of 1845, the fastest boat on the upper lakes... The Company usually employ about 150 hands; and, when particularly busy, have employed as many as 350. There is also on the premises a marine railway, large enough for hauling up vessels of the first class. Post Office, post every day. Professions and Trades.—Three physicians and surgeons, nine lawyers, twelve stores, taverns, two chemists and druggists, three booksellers and stationers, two saddlers, four wagon makers, two watchmakers, two tallow-chandlers, marble works, two printers, two cabinet makers, one hatter, four bakers, two livery stables, two tinsmiths, three blacksmiths, six tailors, seven shoemakers, one tobacconist, one bank agency, .... large quantities of apples, peaches, and cider are shipped annually."

The town's present name was adopted around 1880 as a Postal Address to distinguish the town from Niagara Falls. The name was not officially adopted until 1970, when the Town of Niagara and the Township of Niagara merged.

Most of the former military sites, such as Fort George, Navy Hall, and Butler's Barracks, have been restored. Fort George's restoration was done as a "Make Work Project," guided by plans from the Royal Engineers during the Great Depression of the 1930s, an early example of historic preservation. Fort George National Historic Site is a focal point in a collection of War of 1812 sites which, collectively, are managed by Parks Canada under the name Niagara National Historic Sites. That administrative name includes several national historic sites: Fort Mississauga, Mississauga Point Lighthouse (1804, the first on the Great Lakes), Navy Hall, Butler's Barracks, and Queenston Heights. 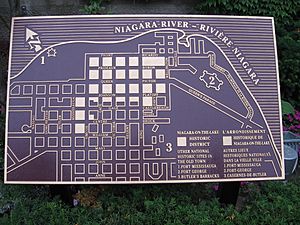 A map of the National Historic District 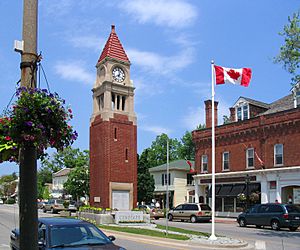 Niagara-on-the-Lake teems with historical plaques, many national and provincial, reflecting its significance in the establishment of many of the province's institutions. Among these were its first newspaper, lending library, parliament, historical museum, and governing body for the legal profession. Critical battles in the defence of Upper Canada took place here, at Queenston, including one in which heroine Laura Secord gained her fame. The town gave many black Americans their first taste of freedom, both as a stop on the Underground railroad for those travelling further into Upper Canada, and as a refuge in its own right. Its stock of Regency and Classical Revival buildings, considered the best in the country from the post-War of 1812 period, led the Historic Sites and Monuments Board of Canada to recommend the town's historic district be designated a National Historic Site of Canada, a designation which was approved in 2003. The historic centre had been designated as a provincial Heritage Conservation District under the Ontario Heritage Act in 1986. Although it did not make the final list, the Historic District was considered for nomination as a World Heritage Site.

Other significant sites in Niagara-on-the-Lake (NOTL): 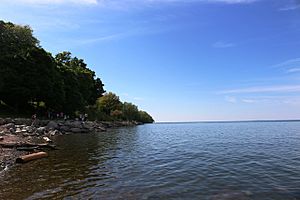 The town is home to the Shaw Festival, a series of theatrical productions featuring the works of George Bernard Shaw, his contemporaries, or plays about his era (1856–1950), running from April to November. The festival operates three theatres in the centre of town: the Festival, Royal George, and Court House theatres, and features one of a repertory acting company, scenic staff, and collection of resident and guest directors considered some of the best in the English-speaking world.

Along the Niagara Parkway is RiverBrink Art Museum, a popular tourist destination in Queenston. It is home to a unique collection of over 1,400 artworks and artefacts by Canadian and international artists, assembled by Samuel E. Weir. Completed in 1970, the building features Georgian-style architecture, including a mansard roof and gabled windows. It served as Weir's country residence, and was converted into an art museum following his death in 1981.

The surrounding region enjoys a comparatively mild climate thanks to the adjoining lakes, and excellent soil for fruit production, for which it has become one of Canada's centres. In particular, NOTL has grown into a major viticultural region. Visitors flock to dozens of nearby wineries, including those making the world's largest volumes of ice wine. The town is also known for its gardens, art galleries, antique shops, and golf courses. There are many hotels, inns, bed and breakfasts, vacation rentals and spas in the area. 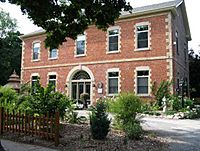 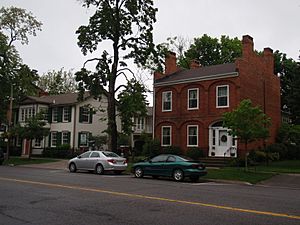 Niagara on the Lake boasts a wide variety of local soccer fields, 2 swimming pools, a community centre, baseball diamonds, hockey rinks, and lacrosse fields. The main pool, Niagara Pool, Is located off of King Street. It is the home of the Niagara on the lake Electrifying Eels Swim Team and boasts 2 high diving boards, change rooms, and a beautiful view of the park surrounding the pool. Swimming lessons, water aerobics, and many youth programs are held at the pool during the summer months. The Niagara on the Lake Soccer Club is the organization which runs all soccer in the town, and is a leading club within the Niagara Region.

Only 15% of the population is under 14 years of age. Those over 65 years of age number 22.6% and constitute a fast-growing population. The town has seen growth of almost 1% annually, partially due to a large number of retirees moving to the town.

The Town of Niagara was the site of the 8th World Scout Jamboree in 1955. Over 11,000 Scouts from 71 countries attended the Jamboree. It was the first to be held outside Europe and had the theme "Jamboree of New Horizons". Niagara-on-the-Lake was named the Prettiest Town in Canada in 1996 by Communities in Bloom, a nationwide beautification programme. The town is now a popular tourist destination, located at the northern terminus of the Niagara Parkway, a scenic drive and biking/walking path. 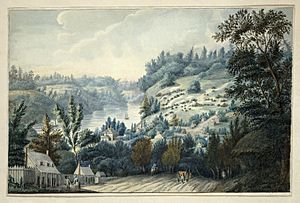 In addition to the primary town site of Niagara-on-the-Lake, the Old Town, the town also includes the villages of Glendale, Homer, McNab, Queenston, St. Davids, Niagara-on-the-Green and Virgil.

Glendale is located near the junction of the Queen Elizabeth Way QEW, Highway 405, and Highway 55, and adjacent to the Welland Canal. It is home to the Niagara-on-the-Lake campus of Niagara College.

Virgil is just south-west of the Old Town of Niagara-on-the-Lake, where most of the tourism takes place. The community has a large Mennonite community, who settled the area in the early to mid 20th-century from Russia. Virgil has a large sports park, serving as the centre of Niagara-on-the-Lake's bustling hockey, softball, lacrosse and soccer leagues, two arenas, three baseball diamonds and a skate park. Once a year, on the Victoria Day weekend in May, the community holds its "Virgil Stampede". The festival includes rides, attractions and its annual soccer start-up tournament. Virgil's educational institutions are St. Michael's Elementary School and Crossroads Public School, which opened in September 2011, amalgamating the now-closed Virgil and Colonel John Butler Public Schools. The town's only secondary school, Niagara District, was closed by the District School Board of Niagara in 2010.

The Old Town also had an elementary school on King Street: Parliament Oak Public School. It was on the site of the signing of the Act Against Slavery of 1793, by the first legislative session of the parliament of Upper Canada.The school was closed on June 25, 2015.

Niagara-on-the-Lake had a junior men's hockey team in the Greater Metro Junior A Hockey League. The team was first registered in the 2018–19 season and played in the Meridian Credit Union area located in Virgil. The team was named the nationals and sponsored by the local bar Bricks and Barley. It was announced that the team would fold after their first season, due to poor attendance.

Niagara-on-the-Lake also has a Men's soccer team named the Lakers, who play in the Peninsula Soccer League (PSL). The team was formed in the 2019 season and sponsored by a local bar, Sand Trap.

Niagara-on-the-Lake also has a rich history in the sport of lacrosse. Being Canada’s national sport, it has a lucrative jr. B as well as a great minor league program to follow.

All content from Kiddle encyclopedia articles (including the article images and facts) can be freely used under Attribution-ShareAlike license, unless stated otherwise. Cite this article:
Niagara-on-the-Lake Facts for Kids. Kiddle Encyclopedia.