Fort Niagara is a fortification originally built by New France to protect its interests in North America, specifically control of access between the Niagara River and Lake Ontario, the easternmost of the Great Lakes. The fort is on the river's eastern bank at its mouth on Lake Ontario. Youngstown, New York, later developed near here.

The British took over the fort in 1759 during the French and Indian War. Although the United States was ostensibly ceded the fort after it gained independence in the American Revolutionary War, the British stayed until 1796, after signing of the Jay Treaty that settled the northern border. Although the US Army deactivated the fort in 1963, the Coast Guard continues to have a presence here. A non-profit group operates the fort and grounds as a state park and preserves it in part as a museum and site for historical re-enactments. It is also a venue for special events related to the region's history.

René-Robert Cavelier, Sieur de La Salle built the first structure, called Fort Conti, in 1678. In 1687, the Governor of New France, the Marquis de Denonville, constructed a new fort at the former site of Fort Conti. He named it Fort Denonville and posted a hundred men under the command of Capt. Pierre de Troyes, Chevalier de Troyes. The winter weather and disease was severe, and all but twelve perished by the time a relief force returned from Montreal. It was decided in September 1688 to abandon the post and the stockade was pulled down. In 1726, a two story "Maison a Machicoulis" or "Machicolated House" was constructed on the same site by French engineer Gaspard-Joseph Chaussegros de Léry. It was called the "House of Peace" or trading post to appease the Haudenosaunee, or Iroquois. The name used today, "The French Castle" was not used until the 19th Century. The fort was expanded to its present size in 1755 due to increased tensions between French and British colonial interests.

For more details, see Great Britain in the Seven Years War, War of 1812, and Capture of Fort Niagara

The fort played a significant part in the French and Indian War, and fell to the British in a nineteen-day siege in July 1759, called the Battle of Fort Niagara. The French relief force sent for the besieged garrison was ambushed at the Battle of La Belle-Famille, and the commander of the post, Francois Pouchot, surrendered the fort to the British commander, Sir William Johnson, who initially led the New York Militia. The Irish-born Johnson was not the original commander of the expedition, but became its leader when General Prideaux literally lost his head, stepping in front of a mortar being test-fired during the siege. The fort remained in British hands for the next thirty-seven years. 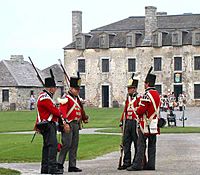 Fort Niagara served as the Loyalist base in New York during the American Revolutionary War for Colonel John Butler and his Butler's Rangers, a Tory militia in the command of the British Army. Lt. Col. William Stacy, a high-ranking officer of the Continental Army, was captured at the attack on Cherry Valley, New York by Butler's Rangers. He was held captive at Fort Niagara during the summer of 1779. Niagara became notorious for drinking, brawling, whoring, and cheating. Crude taverns, stores, and bordellos sprouted on "the Bottom", the riverside flat below the fort.

Though Fort Niagara was ceded to the United States after the Treaty of Paris ended the American War of Independence in 1783, the region remained effectively under British control for thirteen years. Only after signing of the Jay Treaty did American forces occupy the fort in 1796. In the interim, United Empire Loyalists fleeing persecution in the new USA were given land grants, typically 200 acres (81 ha) per inhabitant in Upper Canada, and some were sustained in the early years partly by aid from the military stores of the fort. During the War of 1812 the fort's guns sank the Provincial Marine schooner Seneca on 21 November 1812. British forces captured the fort on the night of 19 December 1813 in retaliation for the burning of Niagara nine days earlier. The British held the fort for the remainder of the war until they relinquished it under the terms of the Treaty of Ghent. It has remained in US custody ever since.

Nine currently active battalions of the Regular Army (4-1 FA, 1-2 Inf, 2-2 Inf, 1-3 Inf, 2-3 Inf, 4-3 Inf, 1-4 Inf, 2-4 Inf and 3-4 Inf) are derived from American units (Leonard's Company, 1st Regiment of Artillery, and the old 14th, 19th and 22nd Infantry Regiments) that were at Fort Niagara during the War of 1812. 52 (Niagara) Battery Royal Artillery (Holcroft's Company, 4th Battalion Royal Artillery), Royal Scots and a number of other British units that fought at the Capture of Fort Niagara still exist today. A number of other units that served in the Fort in the War of 1812 (such as 20 Battery Royal Artillery ( Caddy's Company, 4th Battalion Royal Artillery)) also endure.

The name "Old Fort Niagara" which is associated with the fort today does not refer to its age but to distinguish the colonial-era fortress from its more modern namesake. The post-Civil War era saw the building of "New Fort Niagara" outside the original walls of the fort. Following the Civil War, the military abandoned the use of masonry forts (masonry fared poorly under bombardment), for the style of military camp we now know. The newer Fort Niagara contained a thousand-yard rifle range, access to rail lines, and access to the industrial areas of Niagara Falls and Buffalo. Fort Niagara trained troops for the Spanish–American War and World War I, and during World War II served as an induction center and later a POW camp for 1,200 German soldiers captured in North Africa. After WW II, the fort provided temporary housing for returning veterans.

During the Korean War, the fort was a headquarters for anti-aircraft artillery and later Nike missiles. The Niagara Falls Defense Area originally formed the northern half of the U.S. Army Anti-Aircraft Command defences in western New York State. After the amalgamation of the Niagara Falls and Buffalo Defense Areas, the Army Air Defense Command Post moved to Lockport Air Force Station. Formations directing the defence included the 2nd Artillery Group (Air Defense), which had its headquarters at Fort Niagara from March 1958 to December 1961, superseded by the 31st Artillery Brigade (Air Defense), 101st Artillery Group, and 18th Artillery Group. The only battalion in the region appears to have been the 44th Anti-Aircraft Missile Battalion, superseded by the 1st Battalion, 4th Air Defense Artillery Regiment, on 1 September 1958. The U.S. Army officially deactivated Fort Niagara in 1963, and the 1/4 ADA moved to the Seattle Defense Area where it was active from September 1972 to April 1974. Military presence on the site continues with the United States Coast Guard still operating at "The Bottoms", making Fort Niagara one of the longest continuously run military bases in the United States, 1726–present day.

In 1931, after nine years of lobbying by local citizens for repairs and preservation, a formal operating license between Old Fort Niagara Association and the U.S. War Department established rights to preserve and operate the fort. In 1949, Congress transferred Father Millet Cross National Monument (a small memorial at Fort Niagara) to the State of New York. In 1960 the fort was among the first sites designated as National Historic Landmarks.

Fort Niagara was designated a National Historic Landmark on October 9, 1960 as "Old Fort Niagara" and the Colonial Niagara Historic District was placed on the National Register of Historic Places on October 15, 1966. It is a major contributing element to the Niagara Falls National Heritage Area.

There are people who believe the site to be haunted by a headless French soldier who was beheaded during a duel. It is said he wanders the grounds still looking for his head. These paranormal claims were investigated by Everday Paranormal on their Discovery Channel show Ghost Lab, which aired on October 21, 2010. Also TAPS investigated the site on their Syfy series Ghost Hunters during their sixth season on October 5, 2011.

All content from Kiddle encyclopedia articles (including the article images and facts) can be freely used under Attribution-ShareAlike license, unless stated otherwise. Cite this article:
Fort Niagara Facts for Kids. Kiddle Encyclopedia.