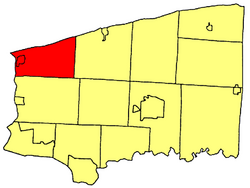 Porter is a town in Niagara County, New York, United States. The population was 6,771 at the 2010 census. The town was named after Judge Augustus Porter.

The Town of Porter lies in the northwest corner of Niagara County and is north of the City of Niagara Falls.

for thousands of years inhabited by varying cultures of indigenous peoples, at the time of European encounter, this was territory of the powerful Iroquois Confederacy, based in present-day New York state.

Permanent European-American settlement did not take place until after the American Revolution, about 1801, after most of the Iroquois had been forced to cede their lands to New York and had emigrated to Upper Canada.

The Town of Porter was created in 1812 from the Town of Cambria, but further development was hindered by the War of 1812. The United States' war with Great Britain first included an embargo of trade with Canada, disrupting the local economy. Warfare along the border continued until 1814.

The northern boundary of the town is Lake Ontario and the Western boundary is the Niagara River, which is the international boundary between the United States and Ontario, Canada.

There were 2,616 households out of which 32.1% had children under the age of 18 living with them, 61.5% were married couples living together, 8.9% had a female householder with no husband present, and 26.0% were non-families. 21.5% of all households were made up of individuals and 9.0% had someone living alone who was 65 years of age or older. The average household size was 2.60 and the average family size was 3.04.

Communities and locations in Porter

All content from Kiddle encyclopedia articles (including the article images and facts) can be freely used under Attribution-ShareAlike license, unless stated otherwise. Cite this article:
Porter, New York Facts for Kids. Kiddle Encyclopedia.