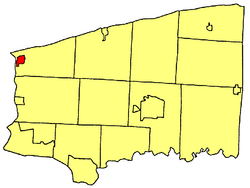 Youngstown is a village in Niagara County, New York, United States. The population was 1,935 at the 2010 census. It is part of the Buffalo–Niagara Falls Metropolitan Statistical Area.

Youngstown is on the western edge of the town of Porter and is at the international border with Canada, at Niagara-on-the-Lake, Ontario. It is north of the city of Niagara Falls.

The village's early growth was under the protection of Fort Niagara. The village was destroyed by the British in 1813 during the War of 1812. The Village of Youngstown was incorporated in 1854, named after John Young .

Youngstown is an historic village located at the northwestern corner of the state where the Niagara River flows into Lake Ontario. In an area known to the Indians for hundreds of years, the French explorer La Salle left his mark by building a small fort in 1670, less than a mile north of where the village now stands. The French gained control of the Great Lakes area and by 1727 built the "Castle" which became the centerpiece of Old Fort Niagara.

John Young, who lived across the river, saw opportunities on this side and built a store on the landing area in 1809. In 1811, he bought Lots 1 and 2 of the Mile Reserve. These included all the property from what is now the north side of Falkner Park and as far south as Campbell Street and from the river eastward to what is now the Robert Moses Parkway.

Young sold the Falkner Park area to Robert Greensit in March 1812 before the war started between the U.S. and England. By that time, a number of log cabins had been built to provide shelter for the skilled tradesmen and storekeepers who were attracted to the area by the Fort which needed many supplies and services.

In 1813, American forces captured Fort George across the river. At Christmas time, they retreated to the American side after burning the Village of Newark, Ontario (now Niagara-On-The-Lake). In retaliation, British and Indians captured Fort Niagara and burned most of the buildings and homes south of it to what is now Buffalo.

Rebuilding gradually took place and by the 1840s the village was well established with many fine homes and stores. The moderate climate, the excellent fishing, accessibility by lake boats and proximity to Canada all played a part in Youngstown's growth. The soil proved invaluable for fruit culture which attracted many farmers. This led to the development of industries such as barrel making, fruit packing and storage, the drying of apples and making of cider and vinegar. Carpenters, blacksmiths and other tradesmen were needed as lumber and shipbuilding businesses were important for many years.

Many changes have come about through the years: concrete sidewalks replaced those made of wood. The dirt and stone road to Lewiston became a safe paved highway; the fire company grew from a man-pulled hose cart into a fully equipped fire department and water and sewer systems were installed throughout the village. The handling of mail began in Judge Hinman's home and was finally delivered house to house in 1959.

Three railroads were built to the village. Two failed immediately in the 1850s, but the electric line carried supplies to the village and fort as well as bringing thousands of people to the old beach amusement park.

Old Fort Niagara is a National Historic Landmark and New York State Historic Site that welcomes more than 100,000 visitors every year. It offers a collection of original military architecture and fortifications from the 18th Century and the 19th Century, as well as living history events and programs, historical exhibits and collections, archaeology, and education.

The history of Old Fort Niagara spans more than 300 years. During the colonial wars in North America a fort at the mouth of the Niagara River was vital, for it controlled access to the Great Lakes and the westward route to the heartland of the continent. With the completion of the Erie Canal in 1825, however, the strategic value of Fort Niagara diminished. It nonetheless remained an active military post well into the 20th century.

The three flags flown daily above the parade ground symbolize the nations which have held Fort Niagara. Each competed for the support of a fourth nation; the powerful Iroquois Confederacy. The French established the first post here, Fort Conti, in 1679. Its successor, Fort Denonville (1687–88) was equally short lived. In 1726 France finally erected a permanent fortification with the construction of the impressive "French Castle." Britain gained control of Fort Niagara in 1759, during the French & Indian War, after a nineteen-day siege. The British held the post throughout the American Revolution but were forced, by treaty, to yield it to the United States in 1796. Fort Niagara was recaptured by the British in 1813. It was ceded to the United States a second time in 1815 at the end of the War of 1812.

Toronto is directly across Lake Ontario to the north. During daylight with clear conditions, the Toronto skyline is visible to the naked eye from Old Fort Niagara State Park.

There were 809 households, out of which 30.9% had children under the age of 18 living with them, 56.9% were married couples living together, 9.3% had a female householder with no husband present, and 30.2% were non-families. 25.7% of all households were made up of individuals, and 12.0% had someone living alone who was 65 years of age or older. The average household size was 2.42 and the average family size was 2.93.

All content from Kiddle encyclopedia articles (including the article images and facts) can be freely used under Attribution-ShareAlike license, unless stated otherwise. Cite this article:
Youngstown, New York Facts for Kids. Kiddle Encyclopedia.